Home | About us | Fast facts 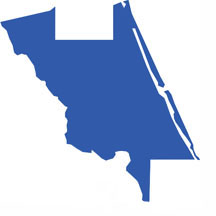 Water sports are plentiful, but Volusia's oceanfront communities are most famous for land sports. Early automotive pioneers such as Louis Chevrolet and Henry Ford enjoyed their leisure time in the sun and found that the hard-packed sand, gentle slope and wide expanse of Volusia's beach was the perfect proving ground for early auto racing. Ormond Beach, in fact, is known as the "Birthplace of Speed."

The racing tradition continues today at Daytona International Speedway, one of the world's finest racing facilities and the home of the world-famous Daytona 500, an event larger than the Super Bowl.

Jackie Robinson Ballpark, located a mile from the beach, features a museum, a minor league baseball team, and a lot of history. It was the first place in Florida to allow Jackie Robinson to play in a game during 1946 Spring Training, a year before Jackie broke the color barrier in Major League baseball. The stadium changed it's name to honor the event in 1989 and is currently the home to the Daytona Tortugas.

The scenic St. Johns River, famed for its bass fishing, links magnificent parks with wildlife preserves along the county's western border. True southern charm can be found in DeLand, the county seat. This unique city features an award-winning downtown filled with antique shops and quaint restaurants, surrounded by stately historic homes and buildings.

Florida Trend’s list of the 350 biggest companies in Florida includes four Volusia County firms: NASCAR, Brown & Brown, International Speedway Corp. and Consolidated-Tomoka Land Co.  TopBuild Corp., representing the assets and operations of the former Masco Installation and Other Services businesses with combined 2014 revenue of $1.5 billion, became an independent, publicly-traded company on June 30, 2015. The defense arm of Sparton, the largest producer of sonobuoys in the world is based here in Volusia County. Teledyne Oil and Gas, the world leader in subsea electrical and fiber optic interconnect systems for offshore oil and gas, defense, oceanographic and telecommunication applications is based in Daytona Beach, and Hawaiian Tropic sun care products are manufactured in Ormond Beach.  Boston Whaler, Edgewater Power Boats and Everglades Boats are all based in Edgewater. Raydon, one of the world’s leading developers of simulation training products and solutions is headquartered in Port Orange.  Medtronic, a global healthcare products company, and Frontier Communications’ Florida Contact center are located in DeLand, which is also home to some of the world’s leading parachute manufacturers.

Volusia County is about an hour's drive north of Disney World and the Kennedy Space Center. It's also within a few hours' drive of other major Florida communities, such as Tampa (139 miles), Miami (253 miles), or Jacksonville (89 miles).

Volusia County consists of 1,207 square miles. Elevation begins at sea level and rises to a high elevation of 110 feet.

What's in a name? Origins of Volusia

Volusia County is named after the community of Volusia, which today is a tiny, unincorporated community on the east bank of the St. Johns River where State Road 40 crosses. However, when Volusia County was carved from Orange County by the Florida legislature in 1854, the community was a prosperous steamboat landing and the largest town in the County. Keep in mind that the entire population of Volusia County barely exceeded 600 people!

The community of Volusia began as a trading post sometime in the first or second decade of the 1800s. It was located where an Indian trail intersected with the St. Johns River. This location was later developed as an important supply depot for the military during the Second Seminole War from 1834 to 1835. When commercial steamships started to travel up and down the St. Johns, the community grew and was listed as one of four post offices in the county. With the introduction of regional railroad systems in the 1880s, the community of Volusia was bypassed, and thus, its era of prosperity ended.

The origins of of the word "Volusia" is of some debate. Despite serious effort by amateur and professional  historians, no one has ever discovered a historic document which has provided the definitive answer.

There are three theories: