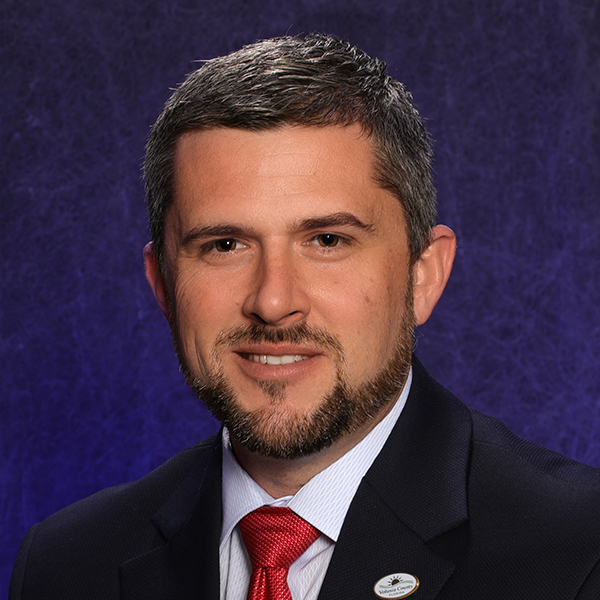 Danny Robins is the District 3 representative on the Volusia County Council. His district includes Port Orange, New Smyrna Beach, Edgewater, Oak Hill and a small area of South Daytona. He was elected in August 2020 and began serving the two years remaining of the uncompleted term of his predecessor in January 2021.

Community service
Police cadet, town of Ulster (2000-2002)
Established the “For The Village” community forum in 2018. Mr. Robins dedicated himself to his community by bringing local leaders together to talk about local issues, current and future projects, crime and agricultural within the Tomoka Farms Village community. He focused on common-sense solutions to community problems, teamwork, unity, factual information and preparing for the future.
Orchestrates community cleanup and improvement projects
Established the Tomoka Farms Village Neighborhood Watch in 2020
Volusia County Cattlemen’s Association

Personal
Born in 1985 in Kingston, New York, about three hours north of New York City. Mr. Robins grew up in a little town named Saugerties, located in upstate New York. At age 9, he first learned the value of a dollar and good customer service selling drinks at the 1994 Woodstock festival, which was on his family’s old farm. In between school, sports and being an outdoorsman, Mr. Robins also worked several jobs growing up to include McDonalds, Mobil Gas station and bussing tables, to just name a few. From an early age, he took advantage of every minute his eyes were open, maximized his earning potential and clearly understood the meaning and importance of the phrase “time is money”. Mr. Robins started his public service career in 2002 when, while still in high school, when he became a fulltime dispatcher for the town of Saugerties Police Department. After graduating high school, he became a Volusia County resident in 2004 and a year later, at the age of 19, became a police officer with the Daytona Beach Police Department. Throughout his career with the Daytona Beach Police, Mr. Robins received medals of valor, unit commendations, beachside neighborhood watch officer of the month honors and 24 positive performance notices. In 2014, Mr. Robins was forced to retire from law enforcement due to injuries sustained during his career. In addition to his law enforcement career, Mr. Robins has been a small business owner since 2006 with extensive experience in sporting goods, the debris/waste industry and heavy equipment operation. Mr. Robins believes there is nothing more therapeutic then grading dirt or operating heavy equipment. He is the father of one son and is dedicated to teaching him the value of a dollar and what goes into making that dollar. Mr. Robins believes that entitlement is our youth’s number one downfall and is a firm believer that this world owes you nothing; You must work for it. He is determined to pass on his work ethic and common-sense to his son by instilling in him that there is no replacement for hard work. Safety and efficiency within his community is at the top of Mr. Robins priority list. He takes pride in supporting all first responders, active military and veterans wherever and whenever he can. Mr. Robins believes that life is only as hard as you make it. His advice to all: use your head and your heart and you will have no problems.