Diversity and inclusion: It’s a journey of learning 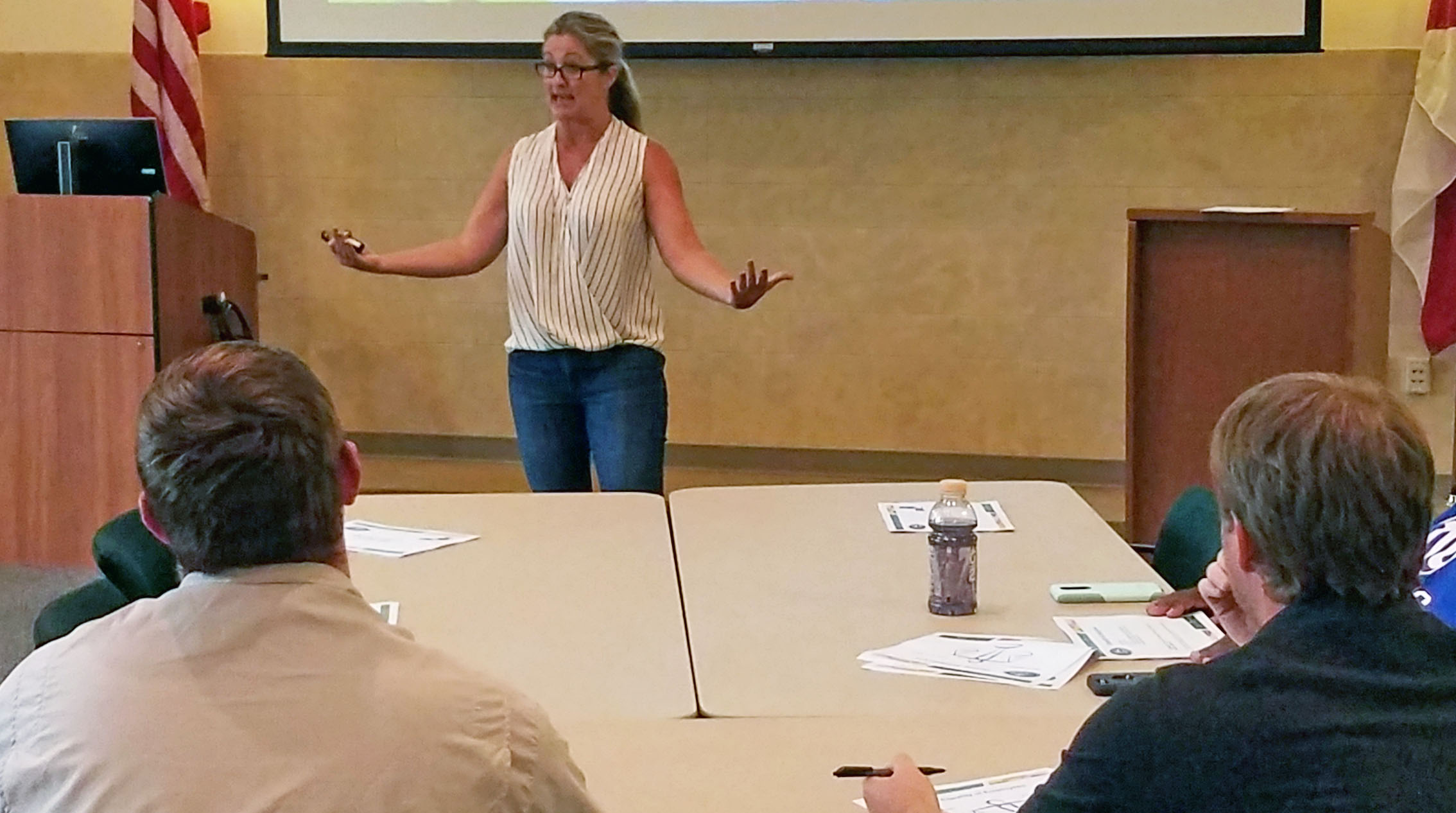 For most people, gabbing with coworkers about their personal life, love and relationships is a commonplace and even healthy part of their work day. It helps forge bonds of mutual understanding and respect and a collegial atmosphere that can make the workplace more harmonious, and therefore more productive.

But for a person who identifies as gay or lesbian, it’s not that simple. For them, being drawn into personal talk in the office can result in stress, anxiety and fear of not being accepted. In extreme cases, it can even lead to bias, prejudice or harassment. That’s why the Volusia County Human Resources Division is addressing the issue head-on with a new series of cultural competency seminars for county employees. The program was rolled out in May, with the first seminar focusing on LGBTQ (lesbian, gay, bisexual, transgender and questioning) issues in the workplace.

The cultural competency seminars are part of a bigger effort to instill, reinforce and strengthen the values of equality, diversity and inclusion throughout the county workforce. Human resources professionals insist that it’s not only the right thing to do, but it also results in a more cohesive and effective organization – an organization that more accurately reflects the community and is better able to serve the public.

“The most efficient, high-performance, dynamic organizations in the world are diverse organizations,” said Jaime Edmondson, the county’s diversity and inclusion specialist who developed the curriculum for the seminar that she so far has taught to approximately 200 county employees. “We need to understand and value and respect each other’s differences and what makes us unique. Diversity is an asset, not a burden.”

The one-hour seminar covers a wide range of complex issues – some of them slightly uncomfortable – such as sexual orientation, homophobia, off-color humor and divergent belief systems. The bottom line of the training is instilling an attitude that the things that make us different also make us stronger as long as barriers are removed and the differences are understood, valued and respected. It’s what a group of county employees working with Edmondson to help spread the diversity and inclusion message has dubbed: “As Many - As One.”

“We’re all made up of different pieces – pieces that are unique and not like somebody else’s,” said Edmondson. “And that’s where we get strength. Because we’re bringing what other people are not, and they’re bringing what we are not. Everybody brings something great.”

During the seminar, Edmondson tries to sensitize employees to the challenges members of the LGBTQ community may encounter in the workplace. For instance, rather than take things at face value, they may feel it necessary to try to read between the lines of what people say and how they act to determine which coworkers are and aren’t comfortable with their sexual orientation. They may feel psychologically unsafe and uneasy while at work, afraid to talk about their personal life or fearful that people will find out about their sexual orientation before they’re ready to reveal that part of their life. Because members of the LGBTQ community aren’t always comfortable disclosing their sexual orientation to coworkers and may keep that aspect of their life private, others in their community have a harder time at work finding role models and mentors to whom they can relate. They may even fear that opening up at work about their sexual orientation could disadvantage them from earning a promotion or cause their input to be dismissed. For most heterosexual people, these are issues they never even have to think about.

“They (LGBTQ employees) have concerns that we need to be sensitive to and aware of,” explained Edmondson.

Recognizing and educating others about the concerns is key to addressing issues and changing attitudes, according to the county’s human resources director, Tom Motes. And that’s why the seminar was launched.

“You can’t change what you don’t recognize,” said Motes.

Sometimes the bias is subtle and unintentional. Think of heterosexism – the assumption that everyone is heterosexual. It could be as simple as striking up a conversation with a new female employee who’s sporting a wedding band by asking her what her husband does for a living. While intended as a friendly gesture of inclusion, the question unfairly assumes the woman is heterosexual and rules out the possibility that she could have a same-sex partner. Immediately, the new employee could feel defensive, anxious or unsure how to respond.

According to Edmondson, awareness is the key to gaining understanding of people’s differences. And with understanding, hopefully acceptance follows. For some, Edmondson hopes, they’ll go beyond acceptance and actively become an ally in support of LGBTQ rights as a way for non-LGBTQ employees to show they accept and value their LGBTQ counterparts.

“We want to raise our level of awareness,” Edmondson told a recent class of about a dozen county employees. “Because no matter who we are, every one of us wants to be respected and understood.”

According to the latest Gallup poll, approximately 4.5 percent of American adults identify themselves as L, G, B, T or Q. That equates to approximately 11 million U.S. adults – roughly the population of the entire state of Ohio. Despite best efforts to raise awareness and understanding, Edmondson realizes that not everyone will be accepting of sexual orientations that are different, that are non-hetero. For some, their religious beliefs won’t permit it. And that’s OK, Edmondson assures her class. But people shouldn’t be considered less valuable or less valued simply because they’re different. Once again, strength through diversity is the message.

“No one’s telling anyone to change their religious beliefs – absolutely not,” said Edmondson. “But what I am asking for is kindness and respect and to value everyone equally, even if they’re not just like you.”

While the county’s Human Resources’ employment and recruitment section works hard to develop a diverse pool of applicants for every job opening, Motes says that’s only part of the job. Educating the workforce and infusing it with a culture and philosophy of inclusion is a critical component.

“To have a diverse and inclusive workplace, we need our employees to understand that we all have biases and blind spots that may prevent us from including people who are different from us,” adds Motes. “Once we understand that we may unconsciously gravitate toward people who are like us and exclude those who aren’t, we can start to break down those biases and become a more diverse and inclusive environment.”

In the seminar, Edmondson goes beyond simply making the case that basic human dignity dictates that everyone be treated respectfully, fairly and equitably. She also makes the case that instilling diversity and inclusion practices makes county government a better workplace and a stronger organization and improves employee communications and interactions with the public. In fact, creating a respected and inclusive workplace has been shown to increase employee morale and job satisfaction, enhance productivity and boost recruitment and retention efforts. The strength comes from people of diverse backgrounds bringing their unique thoughts and ideas and contributions to the job.

“An inclusive workplace means that everybody brings their full self to work, they’re fully engaged, fully feeling valued and fully contributing,” Edmondson said. “When we raise our level of awareness, we have more effective communications, we have more empathy, we have more understanding and we have more trust. As an organization, we think it makes great business sense to diversify and to be inclusive.”

Examine responses to anti-gay stereotypes and prejudices and ask themselves whether any human being deserves to be treated this way.

Make a point of getting to know and understand LGBTQ individuals.

Work with individuals who are openly LGBTQ to help combat prejudice and discrimination. If they’re passionate about the issue, consider becoming an LGBTQ ally.

Perhaps most importantly, employees can join in the conversation. Because as Edmondson points out, organizations that strive to be diverse and inclusive don’t shy away from difficult or uncomfortable issues.

“You have to talk about it,” Edmondson said. “But we have to do these things we’re talking about. It’s something you do, not something you just say.”

Another hallmark of healthy, diverse organizations is that these kinds of discussions never stop. Rather, it’s a continuous and never-ending journey of learning, of awareness and of understanding. To that end, Edmondson is working on plans to roll out the next two installments of the cultural competency seminar series. One will deal with issues involving employees with disabilities. The other will focus on the impacts of having a multi-generational workforce. In addition, the county has developed diversity and inclusion education training for managers and has also incorporated the training into its orientation program for new hires. That way, as the county integrates new programs like LGBTQ into the training, the full spectrum of diversity issues will continue to be reinforced.

“We’re not leaving anybody behind,” stresses Motes. “Everyone’s included.”

Ultimately, the goal is to ensure that the culture of county government changes, grows and adapts to the times by permeating the organization with a philosophy of inclusion from top to bottom. Because as she told the Volusia County Council in 2017 while discussing the County’s diversity and inclusion dynamic master plan: “This isn’t a destination. This is a journey we’re just going to be on. It’s going to be who we are, not just a place we want to get to.”