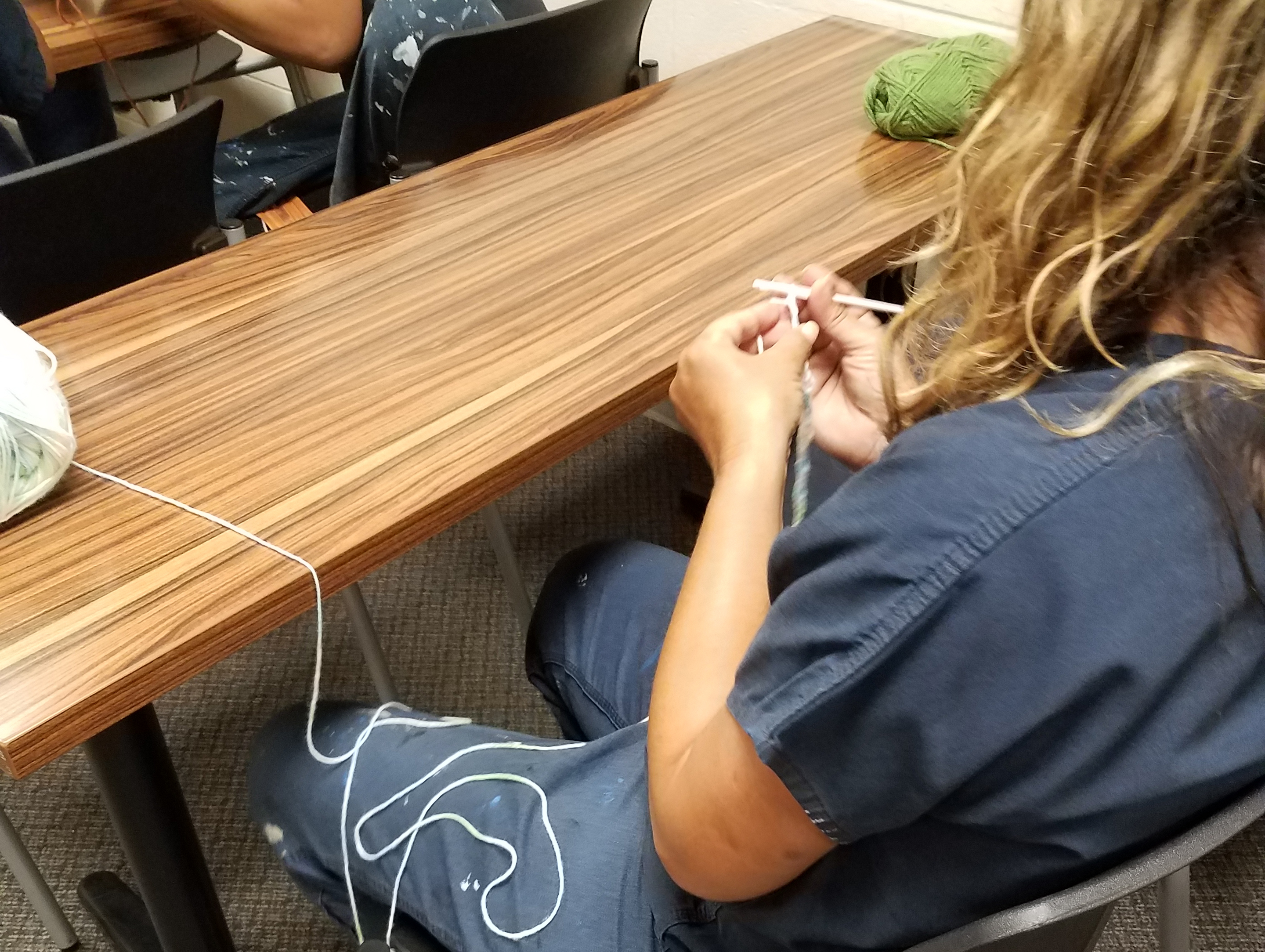 There’s the slip stitch, the single stitch and the chain stitch. The group is learning to fashion a ball of yarn into tiny hats with a very special purpose. And on this day, some are catching on faster than others.

“I’m hopeless,” exclaimed one woman as she struggled to manipulate her yarn with a plastic needle.

“Don’t worry,” the instructor reassured her student. “Nobody has flunked my class yet.”

Except for the location, this could be any crocheting class. But it’s not. This is Crocheting Behind Bars. All the students are inmates at the Volusia County Correctional Facility in Daytona Beach. The women participating in the class are learning the old-world craft to help sick babies who can use the added head warmth the home-made hats will provide. And they’re also learning a valuable lesson – that regardless of circumstances and surroundings, all life can have meaning and purpose.

“I’m glad to be a part of anything that helps the community,” says Nicea, an inmate and mother of five in explaining why she signed up for the crocheting class. “It might not seem so because I’m in an orange jump suit. But looks can be deceiving.”

The hour-long class taught every Wednesday morning was launched at the Correctional Facility in April. Once the students get the hang of it, they can knit a hat in a matter of one or two classes. To Volusia County’s corrections director, Mark Flowers, who initiated the class, it’s not only giving inmates an opportunity to use their time constructively and give back to the community. It’s also giving them a sense of responsibility and accomplishment – important life skills that will help them on the outside.

Tasked with implementing the program, Warden Larry Langdon’s first chore was to find a community volunteer willing to come into the jail and work with the inmates. Enter Carol Dreyer. Involved in the medical field her entire adult life, Dreyer has a soft spot for the sick, the elderly and just about anyone who needs a helping hand to overcome adversity. And she’s a whiz at crocheting. When Langdon asked her to teach the class, Dreyer eagerly accepted. It was a chance for her to do something nice for two groups of people who need the help.

“It’s very rewarding. I feel truly blessed,” Dreyer said. “I just love helping people. If I’ve had an experience I can share with somebody to help them through something, I’m going to do it.”

On a recent Wednesday morning, 10 female inmates took part in Dreyer’s class. Two had been in the class before, and eight were newcomers. Their skill levels varied widely – some had never crocheted before, and others have been doing it for 30 years or more. When the class began on this day, initially it was just the instructor showing the women what to do. Within a half-hour, the women were helping and encouraging each other.

“Don’t give up. You’ve got this,” one inmate told another. “You did a great job,” she tells another.

Adding to the encouragement and motivation was Warden Langdon, observing from the back of the room as he praised the participants and urged them to see the experience as a metaphor for successful living.

“You can do anything, ladies,” Langdon tells them. “It starts here.”

One inmate in particular, Brandi, has really taken to the crocheting class and is already on her fourth hat. Once enough hats are accumulated, they’ll be delivered to Halifax Health Medical Center for sick and premature babies.

“I feel like I’m doing something good for young children who are less fortunate,” Brandi explained. “I hope it brings some comfort to their families.”

For other participants, the crocheting was therapeutic – a welcome opportunity to relieve the stress of being locked up or get their mind off of their problems.

When asked why she signed up for the class, another participant, Christina, said: “I just wanted to try to get out of my head.” 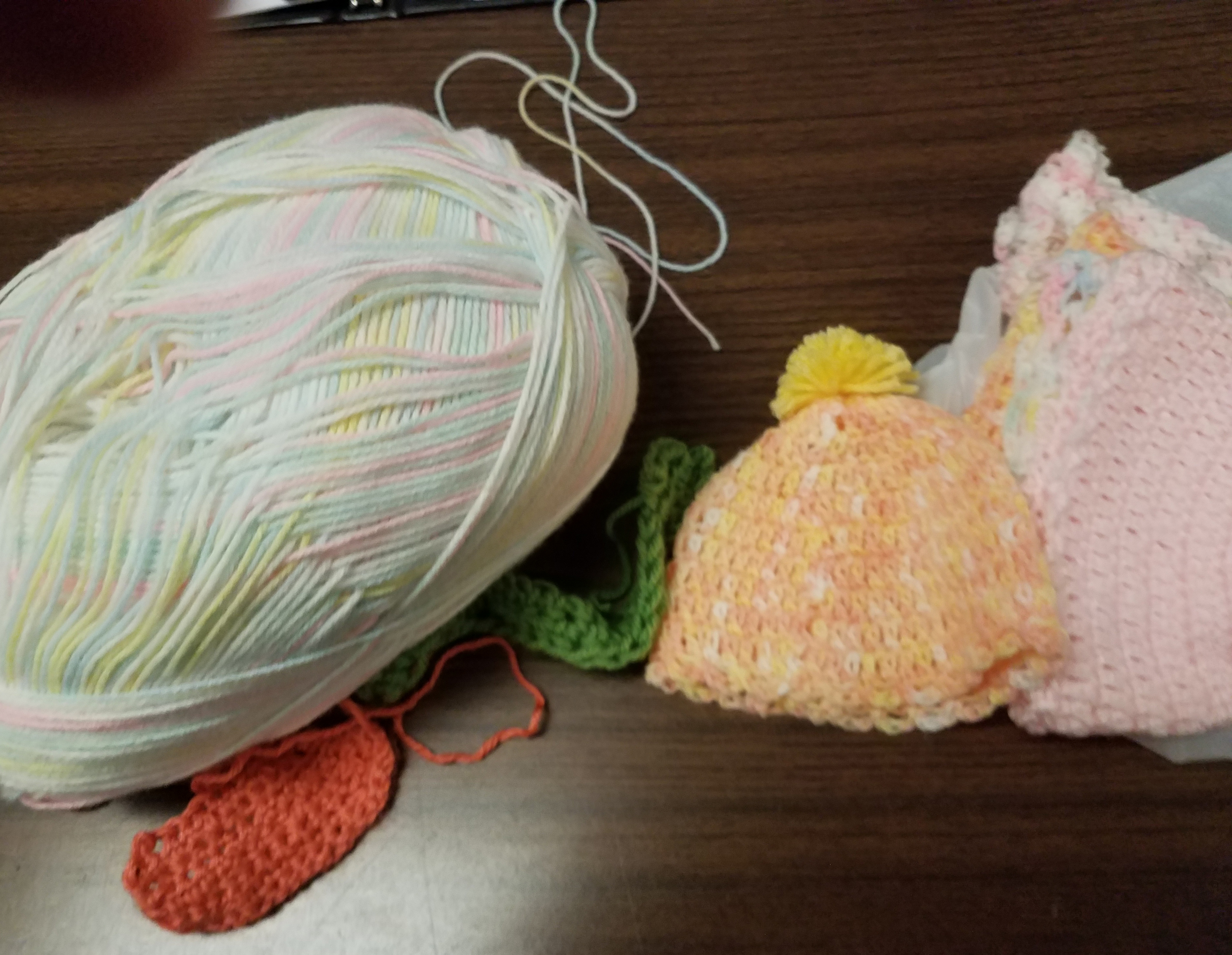 Listening to the inmates talk about the class and seeing the obvious pride they take in their creations, it’s impossible to miss the positive impact Crocheting Behind Bars is having. But to Flowers, the benefits of the program go beyond instilling prisoners with a sense of purpose, hope and self-worth. Programs like these help the corrections staff effectively manage the inmate population by giving prisoners a positive outlet. An inmate who feels productive, encouraged and hopeful is less likely to cause problems, get into fights, break the rules or become discipline problems.

“The crocheting class is keeping them busy in a positive way,” said Flowers. “Idle minds are never good in a correctional environment.”

Flowers’ philosophy is to be fair, but tough when called for, to treat the inmates with dignity and respect. For convicts, jail is punishment. But it’s also rehabilitative for those who are ready to change and want to turn their lives around. Still, Flowers harbors no illusions that every inmate is filled with goodness.

“We’ve got some bad people here. Don’t get me wrong,” said Flowers. “But the majority of them aren’t bad people. They just made some bad decisions.”

As with everything in a correctional setting, safety comes first. So instead of the traditional metal ones, these crocheting needles are plastic. All the materials are kept in a locked box that’s brought into the room by jail security at the beginning of the class. Every item is inventoried, both before and after the class, and no one leaves until it’s confirmed that nothing is missing. After the second inventory, the materials go back into the lockbox and stay there until next week’s class.

On this day, no one finished their hats. But it was a start, a beginning, a teachable moment that impacts the instructor as much as the student.

“They’re like my kids,” Dreyer said of her students. “I love them, and I love what I’m doing.”

For some of those women who were grasping their plastic needles and making those first tentative stitches, Wednesday morning just might have been a start of another kind. For some engaging in an act of kindness toward a baby they’ll never see, and while paying the price for their bad decisions, it just might be a new beginning. For just a few, that change, that turn-around, that transformation – just might start in Carol Dreyer’s crocheting class.