Sand: It’s one of the area’s most valuable commodities.

It’s both a gift from Mother Nature and a benefit of our county’s coastal geography. Sand is a source of endless recreation, an important animal and plant habitat and the white and pink, granular material that fuels Volusia’s tourism trade. But keeping sand where we want it – on the beach and in the dunes – is tricky business that’s affected by everything from nature’s forces like wind, waves, storms, tides and water levels to human activity like driving, foot traffic and seawall construction. And that migration of sand can have monumental impacts on just about everything – people, property, navigation, sea life and the economy.

Soon, the county will have a new tool in its ongoing efforts to manage the 47-mile linear park and playground that hugs Volusia’s ocean shoreline. The first of its kind, Volusia County’s beaches are undergoing a highly detailed and complex topographical survey as a critical first step to mapping the ebb and flow of sand on the barrier island that makes up Volusia’s eastern coast. Officials hope the data generated by this survey and others to follow will lay the foundation for future beach management decisions in order to help keep our beach ecosystem healthy and better prepare the area for the inevitable effects of coastal erosion and the next big storm. It’s both the blessing and the challenge of being an ocean community.

“Volusia County is a unique place. It’s great here,” Joe Nolin, the project manager for the county’s Coastal Division who’s responsible for overseeing the massive beach profile survey, said while gazing out at the beach one recent sunny day. “But we’re very vulnerable and susceptible to coastal erosion. We’re on the knife’s edge. That’s one of the main reasons why we wanted to do this comprehensive beach survey – so that we’re better prepared to deal with the beach erosion that we know is going to happen sooner or later. It’s not a question of if, it’s a question of when.”

Nolin speaks from experience. In his 30 years working in Volusia’s county government, he’s seen the devastating coastal effects of hurricanes like Charlie, Francis, Gene, Floyd, Irene, Irma and Matthew, as well as the brutal, no-name nor’easters that have blown through the area and taken chunks of the coastline with it. He’s seen the beaches erode and flood, roads, streets, swimming pools and dune walkovers wash onto the sand, parks, seawalls and vehicle access ramps destroyed, beachfront homes rendered uninhabitable, businesses forced to close and the local economy ravaged by plummeting bookings at beachfront hotels. But he’s also seen and helped manage the cycles of beach renourishment, recovery and renewal over the years. Some of the recovery has been the result of nature restoring the natural order of things. Much of the recovery and renourishment, though, has been man-made – a successful, but expensive undertaking to transport replacement sand onto the beach.

And that’s where the new beach profile survey comes in. The plan is to repeat the survey periodically so officials will be able to make comparisons over time in how and where the sand is going and the impacts on the beach and dune system. The information should help the county’s policy makers and beach managers better understand the ecology of the beaches. It should also help make their shoreline protection efforts more effective. In short, it should tell them where the potential problem points are before a crisis occurs.

“The results from this first survey will create a baseline,” explained Winterwerp. “Future surveys will be measured against the baseline in order to determine those trends.”

Added Nolin: “We need to have a better understanding of where our sand is going and how it gets there so that we can better manage our coastline. That’s what this is all about.”

The Volusia County Council commissioned the countywide beach profile survey back in May 2019 when it approved a $136,924 contract with a Jacksonville-based engineering firm to do the survey. The work involved survey teams that took comprehensive measurements of the beach’s landscape, slopes, width, depth and elevation from numerous vantage points up and down the shoreline, from the Volusia-Flagler border on the north end all the way to the entrance to Canaveral National Seashore Park at the extreme southern end. 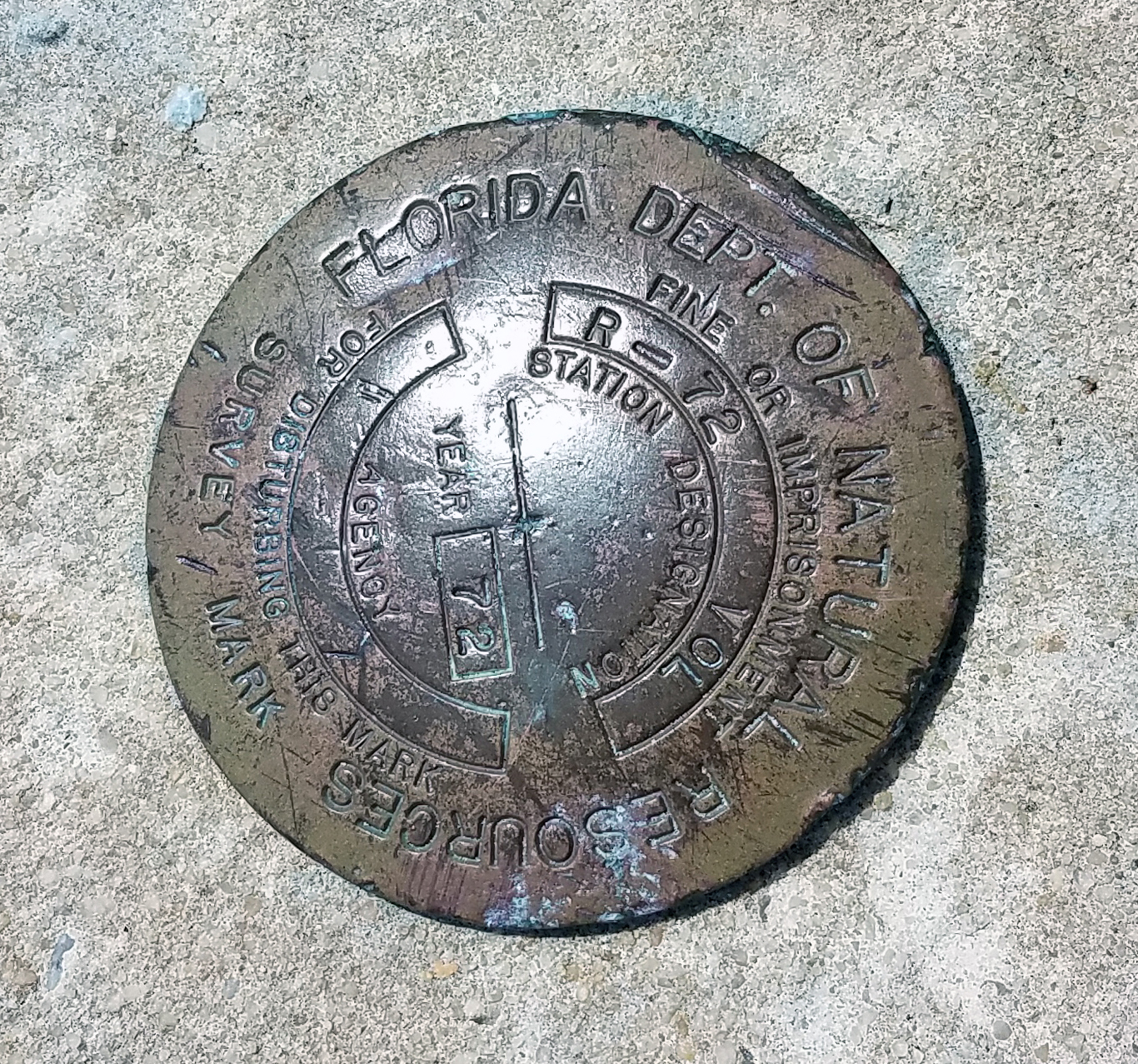 The starting points for the survey were permanent brass markers the state installed many years ago about every 1,000 feet along Florida’s coastline. Each marker has been placed at a precise, known location and elevation. Look hard enough and you’ll see them along Volusia’s beaches – 208 of them in total. Some are affixed directly to seawalls and others are planted into the ground on top of concrete posts. A surveyor holding a rod would initially be stationed at one of the brass markers while another team member aimed an optical device mounted on a tripod at the rod in order to determine the relative positions of lines and objects on the beach. The team then moved around, and eventually a surveyor was wading into the water. Later, even further measurements were taken from boats offshore. The process was repeated at every one of the 208 markers along Volusia’s beaches.

To county officials like Winterwerp and Nolin, the information generated by the survey will be crucial to knowing where homes, businesses, parks, the dune system and access points that the public relies on to get onto the beach are most vulnerable to erosion. It also could help guide future decisions on how and where to beef up shoreline protection – things like the placement of fresh sand, vegetation, fences and new dune walkovers.

“The baseline elevation data developed by the survey is critical to characterizing and understanding beach erosion trends and the locations of critically eroded areas on Volusia County beaches,” stated the agenda item for the survey that was unanimously approved by the County Council in May. “Furthermore, the survey information will allow the county, in conjunction with state and federal partners, to make sound decisions on long-range beach erosion and beach sand management.”

The county has commissioned similar beach surveys before, mostly in response to erosion problems in the New Smyrna Beach, Bethune Beach and Ponce Inlet areas. Those previous surveys covered about 40 of the 208 monument markers in the county. This most recent survey, conducted over the summer in about two months, is the most comprehensive ever in Volusia County and the first one to encompass the entire 37-mile stretch of beaches maintained by the county along with the beaches associated with the North Peninsula State Park.

“This is a massive data collection effort,” said Nolin.

Now that the survey field work has been completed, the data will be compiled into a series of maps, graphs and charts in a final report that’s expected from the contractor this fall. The report’s depiction of the overall beach topography should be enlightening, providing critically-important baseline data that will be compared with future surveys. Over time, the surveys hopefully will answer some lingering questions about the migration of beach sand and pinpoint where potential erosion problems are most acute. But it certainly won’t answer all of the questions. Because when it comes to Mother Nature and trends in beach sand migration, it takes many, many years for the full picture to come into focus.

“When dealing with sand dynamics, Mother Nature operates on a timeframe of centuries,” said Winterwerp. “This first survey will absolutely be useful. But the information will get better and more refined with a larger and consistent data set built over years.”

Still, much is already known. For instance, during the winter, the shoreline typically erodes as sand gets blown up and down the beach and washed out to sea by winds out of the northeast. Much of the sand that gets blown into the ocean is captured and held in sand bars. In the summer, the process reverses and the ocean carries sand back to shore from the offshore sand bars and it’s pushed up onto the beach and dunes. As this process repeats itself over and over, one of the key unknowns is whether, over time, more sand is coming in or going out.

“That’s one of the questions we’re trying to answer,” said Nolin.

Ponce de Leon Inlet also is a major factor in trapping sand that washes down the coast. Sand ends up flowing into the inlet and getting trapped there in large sand bars called flood shoals. It’s both good news and bad. The bad news is that the tidal action diverts sand into the inlet instead of letting it flow onto the beach. The good news is that much of the sand ends up in temporary containment areas, where it’s then available to pump onto the nearby beach or trucked to parts of Volusia’s beaches that are further away from the inlet. It’s an important stash of sand that can help shore up the coastline and protect property and beach access – both before and after a storm.

It’s yet another thing the survey and the science behind it will help with – identifying where the sand will provide the most protection and do the most good. After all, you don’t want to squander such a precious resource. It’s not like Mother Nature is making any more of the stuff. That’s a lesson that some coastal communities, such as Miami, are learning the hard way. In Miami, they’ve exhausted all their sand resources used to protect and nourish their beaches and are looking as far away as the Bahamas for a fresh source.

“That sand we have is an extremely valuable resource,” said Nolin. “It’s worth a lot of money. Other communities would love to have that sand. They would pay to have the sand we have here in Volusia County.”

The state, which partners with the county on many beach management undertakings, has already declared about 19 miles of Volusia’s beaches to be critically eroded. Some of the bigger trouble spots are in the areas of Ormond-by-the-Sea, Wilbur-by-the-Sea, Daytona Beach Shores, Ponce Inlet and New Smyrna Beach. Again, officials hope the new survey and future ones will give them a more clearly defined picture of the problem and insights into the best and most effective ways to protect one of Volusia County’s most important assets – our world-famous beaches that are the lifeblood of the local economy and a beloved way of life for millions of residents, visitors and sea critters.

“The Earth isn’t growing more sand,” said Nolin. “So we’re all trying to figure out how to best move the sand around and manage where it’s going and where it’s coming from and keep it on the beaches so that we have healthy dune systems, healthy beach habitat for endangered species and for recreational access for residents and visitors. In Florida, the beaches are our main economic driver. Everybody’s coming to Florida to go to the beach. These places live and die by their beaches.”