Dog obedience class behind bars: A second chance for people and pooches 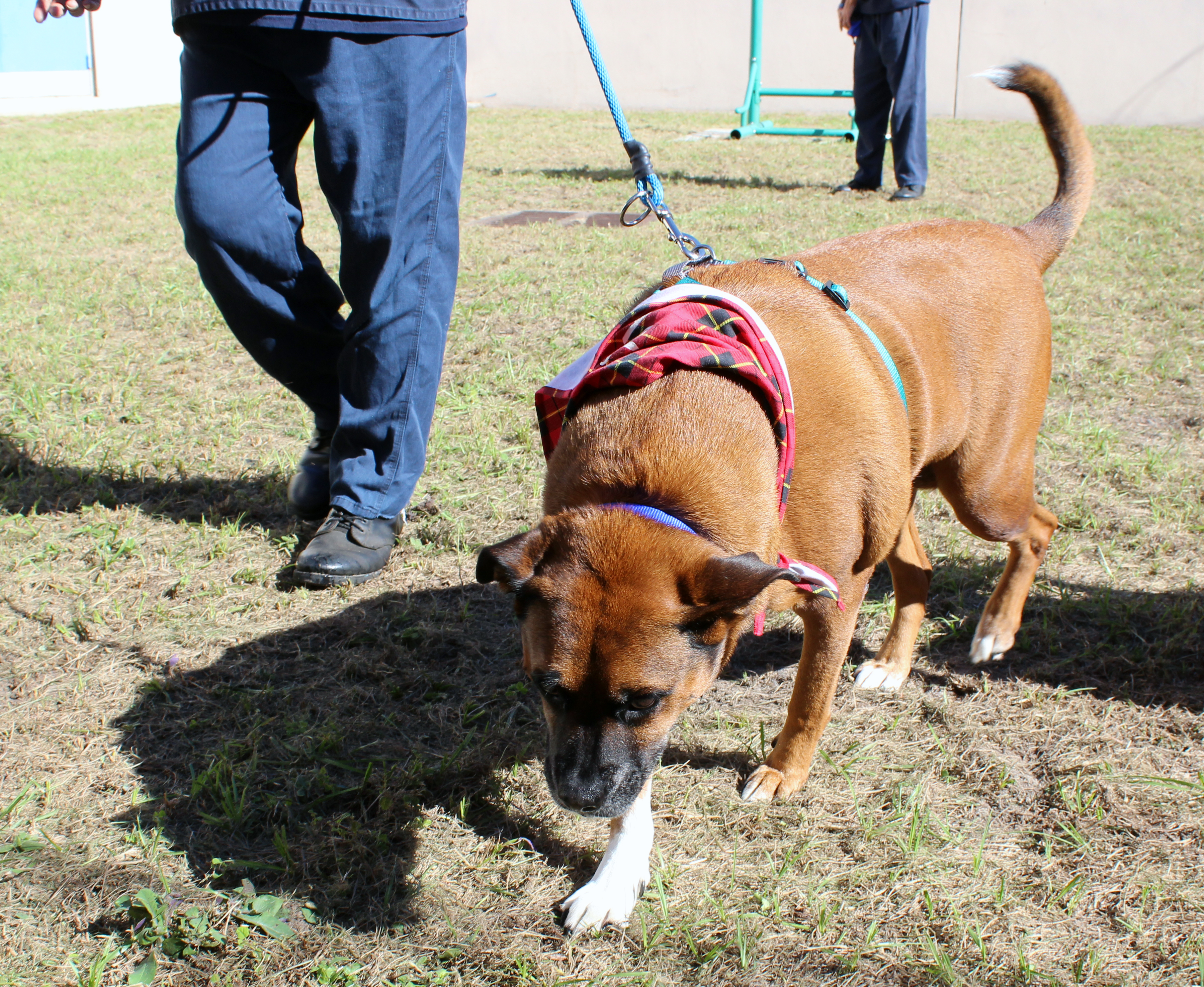 For both dog and handlers, week two of obedience class seemed to be going well.

An adorable, but rambunctious 6-month-old puppy full of energy and spirit, Diva was beginning to grasp basic concepts like name recognition, sitting and loose leash walking. Now it was play time, but Diva was tentative at first. After some effective coaxing from the two handlers, Diva turned bouncy and frisky as she pranced around the walled yard pouncing on every flying insect that crossed her path. But this was more than mere puppy play time. It also was an opportunity for the small pup to socialize and become acclimated to new people – all essential qualities if Diva is going to find an adoptive family.

This is no ordinary doggie obedience class. This is a seven-week rescue program to help save dogs at the Halifax Humane Society by transforming them into well-trained pets with a much better chance of finding a new home before their time runs out. At the same time, officials hope the obedience class will also be a transformative lifeline for the handlers as well – all of them inmates at the Volusia County Correctional Facility in Daytona Beach. The newly launched dog program is a second chance for people and pooches. For the dogs, the aim is to save them from a potentially gloomy fate at the pound. And for the inmate handlers, they learn a practical skill that can give their life behind bars meaning and purpose and a step towards redemption.

“They get some experience and they get a sense of accomplishment,” explained the program’s coordinator, Jackie Burns, of the female inmates who’ve been selected to participate in the program. “It really does give them their second chance in life.” 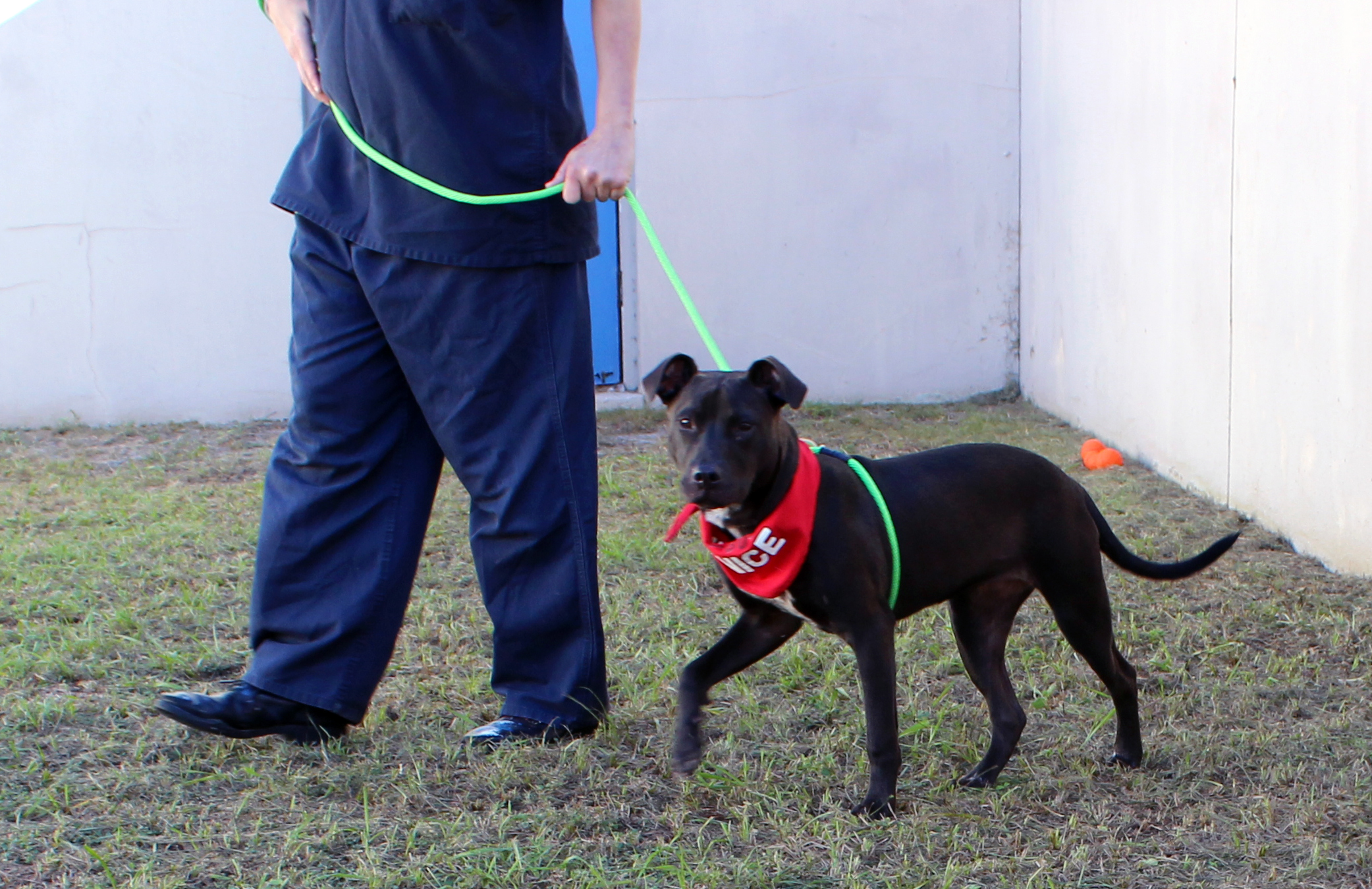 With help from Halifax Humane Society, the program was launched two weeks ago by Volusia County Corrections Director Mark Flowers. Flowers has been a strong advocate for providing more positive outlets for inmates and less idle time for them to get into trouble. The goal is to make the jail experience not just punitive, but rehabilitative as well. The dog obedience class is but the most recent example. “Anything we can do to keep them busy, keep them positive and give them a sense of hope, is a blessing from us,” said Flowers. “Many of our inmates have never been given the responsibility to do anything.”

Under the program, being overseen by Warden Larry Langdon, Halifax Humane Society selects the dogs from its shelter and provides other resources such as dog food and training assistance. And it’s an added plus that Burns has prior experience as an animal control officer and working in an animal shelter. While the female inmates she supervises have all asked to be assigned to the dog obedience team, they don’t all get it. There are limited slots and to be considered, they have to meet certain criteria – such as being sentenced, not having major disciplinary issues and not having any convictions for animal abuse. The program is starting small, with two dogs – Diva and an 8-year-old pooch, Gracie. Eventually, if all goes well, Warden Langdon would like to see the obedience program expand to include inmate training of service dogs for people who suffer from post-traumatic stress disorder or other mental or emotional conditions. 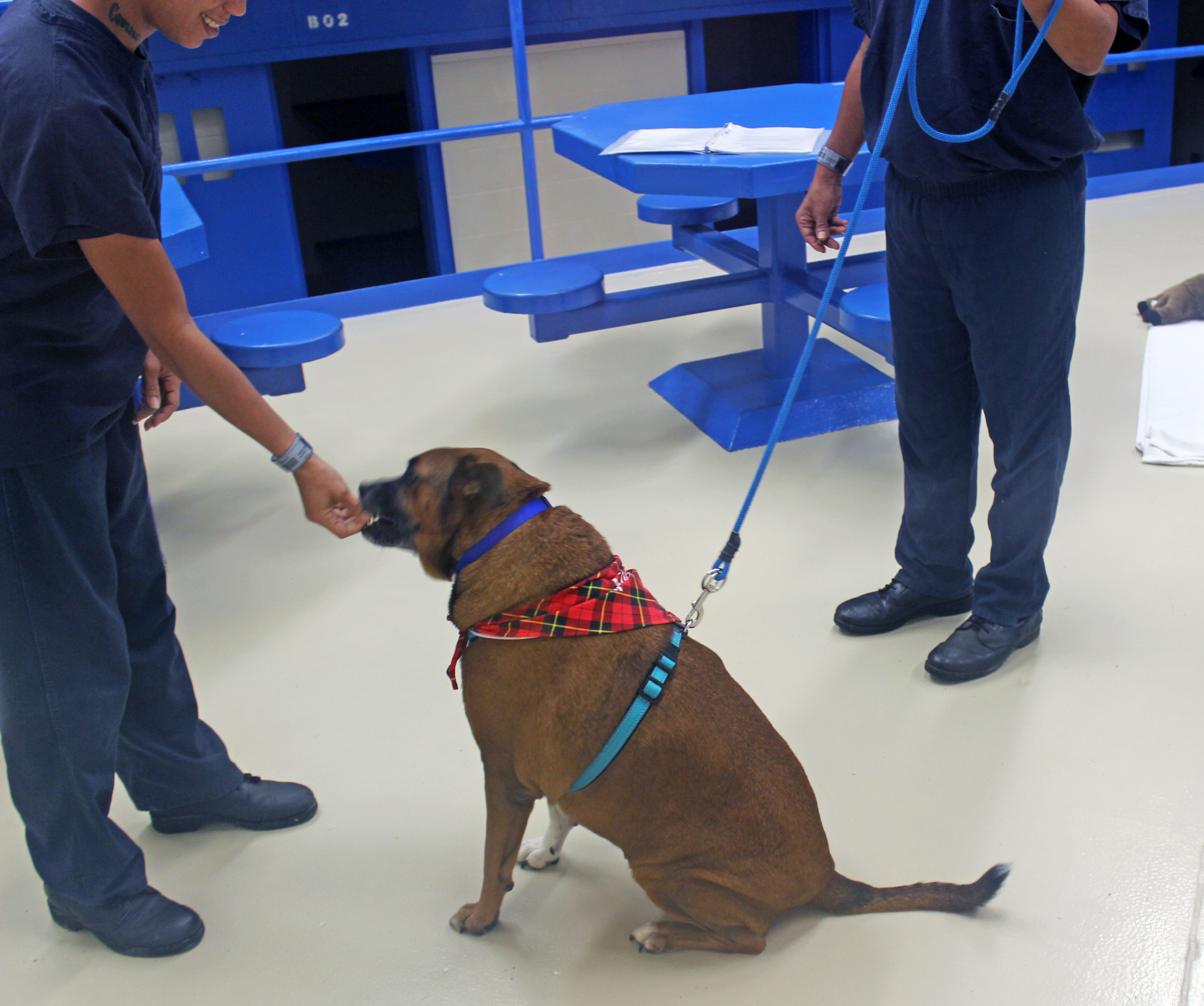 Each dog has two female inmate handlers who will train the animals for seven weeks, Monday through Friday for 8-hours-a-day. At night, the dogs sleep in crates in the cellblocks, meaning they’re under 24-hour care from their handlers. The dogs and handlers get weekends off from training. With support and help from Halifax, Burns is educating the handlers in how to train the dogs assigned to them using techniques such as enticing them into mastering a skill with treats and rewards, voice commands and gentle encouragement. In seven weeks, they’ll cover things like training the dogs to stay, come, sit, walk through a crowd, accept friendly strangers, walk without tugging at the leash and how to appropriately react to distractions and other dogs. The handlers also will learn animal grooming and first aid.

At the end of the seven weeks, there will be a graduation ceremony for the dogs and their handlers. Then the dogs will be returned to the Humane Society, where their odds of being adopted will increase dramatically. But that’s not all: For those inmates who excel as handlers, Halifax Humane Society has promised to consider them for employment after they’re released. Inmates at the Correctional Facility generally serve terms of a year or less. While incarcerated, helping them learn skills and self-respect and prepare for life on the outside reduces the chances that they’ll be back. That’s what the Correctional Facility’s new dog obedience class is all about. With the program, the inmates are giving dogs a second chance at life and their faithful, four-legged students are returning the favor.

“This program gives the participants something to wake up for – something to look forward to,” said Langdon. “The dogs, their future was bleak at best. And the inmates’ future is bleak at times. They’re traveling this road together, and this is a window of opportunity to build a better future for both.”