For marine habitat enthusiasts like Debbie Wright, responding to reports of sick and injured aquatic animals can be a grim business. Sadly, the animals often are already dead before rescuers ever arrive.

But not this time. It was Sept. 6, 2019, when an urgent call was received about a manatee mother and her calf that had become trapped in a cove along the Halifax River. The walled-in catch basin at a local marina in Daytona Beach is designed to capture sediment to prevent it from flowing into the river. But now, the basin had instead inadvertently captured two lumbering, lovable sea cows with no way out. Officials believe the manatees swam over the wall and into the basin during high tides from Hurricane Dorian. Once the water level receded, the animals were hopelessly confined in the basin.

Try as they might, the imprisoned manatees were unable to swim back over the top of the retention wall to get to the open water. Rescue options were hatched while curious onlookers and the news media gathered on the banks of the river to watch the spectacle unfold. The hope was that the animals could be freed without having to physically handle them – something that would have surely caused added stress to the manatees. Then, on the sixth day of captivity, and with a dwindling food supply in the basin, workers using a barge and crane raised two of the wall’s huge panels high enough to create an escape route. And Wright had a front row seat for the climactic liberation.

As Volusia County’s manatee protection program manager and head of Volusia’s Marine Mammal Stranding Team, Wright was in the water at that fateful moment, gently paddling a kayak while helping to shepherd the trapped manatees to freedom through the gap in the retention wall.

“I kind of corralled the manatees from my kayak,” said Wright of that final, exhilarating moment of release. “They headed towards the opening, took a breath and then they took off.”

The successful rescue operation, coordinated by the Florida Fish and Wildlife Conservation Commission (FWC) and teams from the county and the City of Daytona Beach, was memorable and emotional for all involved. It generated national news coverage from as far away as the Washington Post and New York Times as well as cable networks like MSN and The Weather Channel. While it got more attention than most, this was but the latest call-out of the more than 800 that the Volusia County Marine Mammal Stranding Team has fielded since its inception in 2003.

“It’s extremely rewarding work,” said Wright. “We have quite a few county volunteers, and they’re very passionate about marine mammals and conservation.” 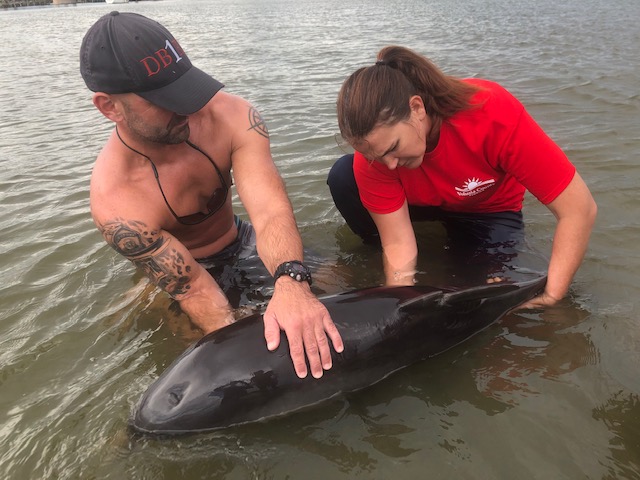 While the members include Wright and one of her employees, the core component of the Marine Mammal Stranding Team is approximately 32 specially trained volunteers – county employees with other jobs, who are available around-the-clock to respond to water-based animal emergencies. Ordinarily, two members respond at a time – an experienced volunteer who is paired with a newer volunteer who has been trained in team protocols and the basics of marine mammal biology, but is still receiving hands-on instruction in the field. Sometimes, like in the case of the manatees stuck in the marina, more than two team members are needed. The team’s call-out rotation means someone is available to respond at all times to any water body in the county.

“All of us, we’re really dedicated to doing anything that we can to help these species,” said Wright.

The team provides an immediate and organized response to reports of whales, dolphins, porpoises and manatees in distress. The group works in conjunction with the Florida Fish and Wildlife Conservation Commission and the Hubbs-SeaWorld Research Institute, which are based in Melbourne and Jacksonville. Because of the distance, it usually takes a minimum of 90 minutes or more for either organization to get someone to a scene. When every minute counts, a quick response from Volusia’s local team can be absolutely critical to the survival of a live, stranded marine mammal.

Depending on the circumstances, deployed team members might simply act as a so-called verifier – someone who makes visual assessments of an animal in distress, provides location information to other responders and stays with the animal until more help arrives. Or they might need to provide direct care, such as covering a beached dolphin or whale with water and wet towels to prevent sunburn, making sure the animal remains upright to prevent its blowhole from becoming obstructed or inhaling water and sand, monitoring its respiration or assisting with the animal’s removal to a rehabilitation center where it can be nursed back to health and ultimately returned to its natural habitat. Team members tote their trusty stranding kit to the scene – containing everything from towels, buckets and rope to caution tape and stakes to create a buffer zone around an injured animal and tools for performing an animal autopsy, or necropsy.

Another vital task of the team is to keep onlookers at a safe distance from a distressed animal and stop well-intentioned people from trying to help a beached animal by pushing or dragging it into deeper water. To the untrained, that might seem like the right thing to do. But in reality, it can scrape the animal’s skin, cause potential damage to its flukes and pectoral flippers and preclude experts from evaluating the animal to see if there’s an underlying medical issue that needs to be addressed before returning it to the wild.

When responding to reports involving dolphins, whales and porpoises, the Volusia County Marine Mammal Stranding Team works as a designee under Hubbs-SeaWorld Research Institute’s stranding agreement issued by the National Marine Fisheries Service. Volusia County is part of the southeastern region for a national stranding network that encompasses coastal areas in Florida, North Carolina, South Carolina, Georgia, Alabama, Mississippi, Louisiana, Texas, Puerto Rico and the U.S. Virgin Islands. And when responding to manatee calls, the Volusia County team operates under the umbrella of a separate letter of authorization issued by the U.S. Fish and Wildlife Service. The stranding team also is a key component of the county’s manatee protection plan, which is required for Volusia and 12 other Florida counties that the state has deemed to be crucial to the survival of the threatened species.

Since its creation, the Marine Mammal Stranding Team has responded to approximately 850 animal sightings. About 55% of the calls involved manatees and about 39% involved dolphins. Just 46 of the calls involved whales. While the team responds to every call, not all of them turn out to be an animal in distress. Sometimes, the reported animal can’t be located. Other times, the animal is located and found not to be in distress. But when an animal is found to be in distress, the team springs into action. In addition to assessing the situation and helping to determine the best course of action, the team’s duties often include such things as taking measurements of the animal, determining its sex and monitoring the animal.

The team also utilizes the services of a veterinarian as needed and partners with animal rehabilitation centers. But despite best efforts, not every animal can be saved. Some are dead before the team arrives or are so sick or seriously injured by boat strikes or other causes that they subsequently succumb or must be humanely euthanized by a veterinarian.

“It’s not always a happy story at the end of the day,” Wright said.

Still, collecting measurements, tissue samples and other data from a dead animal is hugely important because it provides clues to the history, ecology, health and mortality of species that are inherently difficult to study in the wild. That data collection can even provide significant information on the overall health of the area’s marine environment.

The importance of the stranding team can’t be over-stated, according to Katrina Locke, who as Volusia County’s sustainability and natural resources director, is responsible for overseeing the team’s work.

“These are local people who have the knowledge and training to help us be good stewards of our environment,” said Locke. “What they do is extremely important.”

Animal strandings have many causes. Some animals may be suffering from the effects of old age, organ failure, a boat collision or a virus or other illness. Others become entangled in nets, fishing line or other foreign objects. Sometimes orphaned infant animals show up, struggling, stressed and unable to survive on their own. When a stranded animal dies, the necropsy hopefully provides answers on the cause. But with some strandings, the reason simply isn’t known or readily apparent.

As with all things, human impacts on the marine system can be negative or positive. With their actions, people can help fix problems or make them worse. And that’s why public education and awareness is so essential to programs like the Marine Mammal Stranding Team. It’s a way to enlist the public’s help, support and understanding of the importance of protecting our precious aquatic habitat. Public education and awareness can be one-on-one – a lone volunteer discussing ecology and animal mortality with someone gathered at the shoreline to observe a beached dolphin. Or it could be thousands of people reading and watching news accounts of the successful rescue of two trapped manatees.

Another way Volusia County educates the public on environmental conservation is through the approximately 100,000 people who annually visit the Marine Science Center located in Ponce Inlet. Every day there is an opportunity to touch people’s hearts and minds. “Our job is to tell those stories so that we can educate the public about how they can help lessen the human impacts on our marine life,” said Chad Macfie, manager of the Marine Science Center.

“The Marine Science Center and the Marine Mammal Stranding Team work to spread that conservation message. We need to keep telling those stories.”