Up, up and away: Volusia County job creators reach for the stars 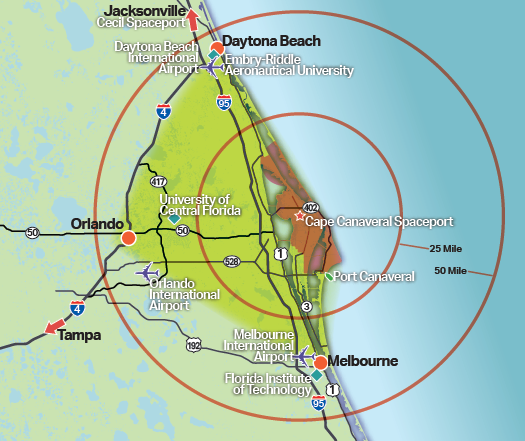 When it comes to economic growth, jobs creation and attracting new industry, timing and location are everything. And now, there’s a growing realization and excitement that Volusia County has all the right stuff to capitalize on the explosive growth that’s enveloping the booming aerospace industry just across our southern county border.

While the U.S. government’s emphasis on space flight has diminished, the private, commercial sector of the space business is thriving – literally reaching for the stars with the power and thrust of a Falcon 9 rocket. And all signs point to the potential expansion of some of that business – and the lucrative, high-tech jobs that come with it – from Cape Canaveral due north right here into Volusia County. That’s why government, business, chamber, education and other stakeholders are intensifying their efforts to lay the groundwork – and the welcome mat – for the spinoff businesses that are integral to the aerospace industry’s lifeblood, its all-important supply chain. Those efforts have included local aerospace forums, strategy sessions with Space Florida –  the state’s aerospace economic development agency – and the commissioning of a study to help Volusia County identify local trends and opportunities in the global space economy. Officials are coordinating like never before to ensure that Volusia County has the right stuff – the regulatory climate and educated workforce necessary to entice space-related industry.

With the space sector poised for expansion, Volusia County’s efforts so far are aligning at the exact right time. To top it off, the county is geographically fitting due to its available land and close proximity to the Cape Canaveral Spaceport in Brevard County. In other words, Volusia County has all the advantages of timing and location. In aerospace parlance, when it comes to the business of going into space, Volusia County is ready for lift-off. This area’s unofficial message to the aerospace industry: Volusia’s right and Volusia’s ready.

It’s that mounting realization that Volusia County, squarely located within the northern quadrant of the so-called space triangle, may be poised for a potential aerospace boom that has officials excited and united. One look at the appointment calendar of County Council Member Deb Denys shows how and where much of her time is spent. She’s in meetings with Space Florida and Embry-Riddle Aeronautical University, talking to Volusia’s elected representatives in state and federal government, attending space commerce workshops and the Aerospace Alliance annual summit, coordinating messaging with business recruiters at Team Volusia and the CEO Business Alliance and chatting up aerospace opportunities at the Roundtable of Elected Officials. And more and more, there’s an overwhelming feeling that Volusia County could be on the verge of something big.

“We’re right there,” said Denys. “The door is wide open for Volusia County.”

State Sen. Tom Wright agrees, and he’s working within the state Legislature to help propel the issue forward with the creation of a Space Caucus.

“We have the opportunities right here in front of us,” he said during a recent gathering of a cross-section of government and private sector representatives who came together to plot their space strategy.

Ironically, Volusia County’s potentially good fortune is a direct consequence of some disappointing news. Back in 2011, when the space shuttle program was mothballed, Central Florida braced for an anticipated economic death blow. As it turned out, the exact opposite happened. Private companies like SpaceX, OneWeb, Blue Origin and United Launch Alliance moved in to the fill the void with commercial launch and satellite services. The global space economy is now a $340 billion-a-year industry, which included 114 orbital launches in 2018 – the most in 28 years. The launches put a wide variety of satellites in space that support all sorts of uses, like weather forecasting, wireless communications, GPS applications, satellite imagery and mobile banking, to name but a few. And more launches and more satellites going into space is generating a rapidly increasing need for ancillary businesses to serve the space industry’s needs – everything from solar power, batteries, computers and compulsion systems to engine parts, avionics, maintenance service, raw materials and high-tech guidance, telemetry and navigation systems. With the Cape Canaveral area running out of available sites for all of these needed feeder industries, many agree that there will be northward migration across Brevard’s border and into Volusia County. In fact, it has already started to happen.

“What’s down there is filling up. So it’s got to come north,” said Kent Sharples, president of the CEO Business Alliance, a privately funded organization that’s a key player in Volusia’s space efforts. “And we’re ready.”

There’s yet another factor in the expansion of the space industry, but it isn’t exactly good news. In fact, it’s downright scary, according to Rep. Michael Waltz, who represents Volusia County in the U.S. Congress. While he’s working closely with Volusia’s space advocates, to Waltz, the future of aerospace isn’t just about jobs. It’s about defending the United States from powerful adversaries like China that are increasingly looking to militarize the heavens. The U.S. Space Command was established earlier this year to confront the growing threat and help ensure that the U.S doesn’t become vulnerable to attack from space. That will require the government to restore some of its focus on space. According to Congressman Waltz, Volusia County is well positioned for expansion of both military and civilian space applications. And he said one of this county’s greatest assets is the unity of purpose among government representatives at all levels. As a member of the House Committee on Science, Space and Technology, the congressman is in a good position to both influence the future of the aerospace industry and help Volusia County get a share of the pie.

“I don’t think you’re going to find local, state and national elected officials that are more excited and more willing to work with the space industry and the aerospace industry as you will find in Volusia County,” said Waltz.

Volusia County’s recruitment efforts also have another powerful ally in Mori Hosseini, a well-connected developer who sits on both the Embry-Riddle Aeronautical University’s board of trustees and Space Florida’s board of directors. Hosseini, too, sees great opportunity for Volusia County.

“The resurgence and growth at the Cape Canaveral Spaceport continues to inspire others across the country and around the world,” said Hosseini. “As that transformation occurs, Volusia County stands ready to become an ever more integral part of that future.”

Speaking of the future, take a look at Space Florida’s master plan for the Cape Canaveral Spaceport and surrounding area, and you’ll see a triangle on a map – the space triangle. The northern most point in the triangle is Daytona Beach – not coincidentally, given the location of Embry-Riddle, one of the country’s pre-eminent aviation and research colleges. The triangle then goes south, through Southeast Volusia to Melbourne and west to Orlando. The triangle forms a target area that’s ripe for space business. And Volusia County has a lot to offer. It has a transportation system that includes two interstates, a county-operated international airport, an inlet and rail service. It has five universities producing an educated workforce and a first-rate research park at Embry-Riddle, anchored by its burgeoning business incubator for aerospace startups, the MicaPlex. Companies with aerospace tie-ins that already have a presence here include Sauer Group and Arrelis Ltd.

All of this aerospace talk puts Southeast Volusia in a particularly advantageous position due to its prime location directly across the Brevard border. The tri-city area of New Smyrna Beach, Edgewater and Oak Hill has joined forces to try to put the region’s best foot forward and capitalize on the potential space opportunities. The effort is being headed by a joint Chamber of Commerce and the Southeast Volusia Manufacturing & Technology Coalition.

“We’re right there in the middle of the triangle,” said Samantha Bergeron, Edgewater’s economic development director. “We are positioned in a great place.”

And Bliss Jamison, chair of the Manufacturing & Technology Coalition, referred to Southeast Volusia as a “hidden jewel.”

Meanwhile, business recruiters with Team Volusia and the CEO Business Alliance are working with local governments and large landowners to identify an inventory of available buildings and shovel-ready sites that can be fast-tracked if more aerospace businesses come calling. That inventory includes a 322-acre tract of land at Daytona Beach International Airport, conveniently and strategically situated adjacent to Embry-Riddle. County Council Member Denys has revealed that the county is in the preliminary stages of establishing an overlay zone within Volusia’s portion of the space triangle that would help accelerate any zoning, land use and site plan approvals needed to move an aerospace project through the regulatory process. Denys said the idea is to address up-front any issues that might hinder an aerospace-related business from setting up shop here.

“We can’t compete, nor should we, with private industry,” said Denys. “Our job is to clear a path so when the opportunity arises, there are fewer obstacles that exist,” said Denys. “If we have obstacles, they’ll go anywhere else.”

And if more aerospace-related businesses do come calling, Rick Karl, the county’s director of aviation and economic resources, insists that Volusia County is ready to answer the door with open arms.

“We’re dialed into this supply chain opportunity. We’re working as a team and we’re here to make it happen,” Karl recently told a room full of county and municipal officials from Volusia. “We just need to continue to collaborate and work together.”