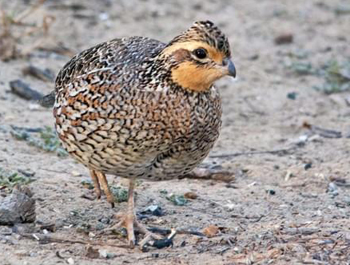 In the thousands of acres of dense thicket that envelop the expansive Lake George Forest and Wildlife Management Area, spying 16 birds might not seem like a big deal.

But when they’re the elusive bobwhite quail, whose dwindling population and natural habitat have been decimated by growth, urban development and commercial forestry, every sighting is cause for celebration. Protecting and preserving their home turf and monitoring the fragile health of the species – along with the wide variety of other birds, fish, mammals, reptiles and amphibians that inhabit Volusia County’s conservation lands – is a big job for the county’s Land Management team. (Photo of bobwhite quail from All About Birds)

Applying professionally accepted principles of restoration and ecosystem management, the county is on a mission to protect and preserve all that property for future generations of people and animals. And that’s where modern technology comes in – a digitized app that helps record data about animals and their movement. Land managers expect the data to be extremely useful in documenting the effects of their management and preservation practices – what’s working and where and how to maximize their resources for the best results. Rather than relying on anecdotal evidence and visual observations alone, the app will plot sightings on a map and create the ability to electronically document all sorts of helpful information to aid in land management decisions.

“Over time, this new tool will give us a source of objective data that’s both track-able and measureable,” said Tim Baylie, who, as the county’s director of Parks, Recreation and Culture, oversees the Land Management activity. “It’s helping us meet the mission of why our land management program exists and what it does for the habitat.”

The land management program falls under the Volusia County Parks, Recreation and Culture Division and is responsible for the management, enhancement and restoration of conservation lands.  Much of these lands were acquired through the Volusia Forever program. And the bobwhite quail is just one of many animal species that the county is trying to help to thrive through its habitat management efforts. While those efforts aren’t just aimed at helping these small, ground-dwelling birds, the bobwhite quail is considered a nearly perfect indicator species. In other words, if the quail are flourishing, many other species are probably also doing well. Unfortunately, the bobwhite quail haven’t been doing well at all. In fact, their numbers have plummeted an estimated 85% in the last 50 years due to habitat loss. But there’s some good news. The population has been rebounding as of late, largely due to proactive habitat management efforts undertaken on public lands, precisely as Volusia County has done. 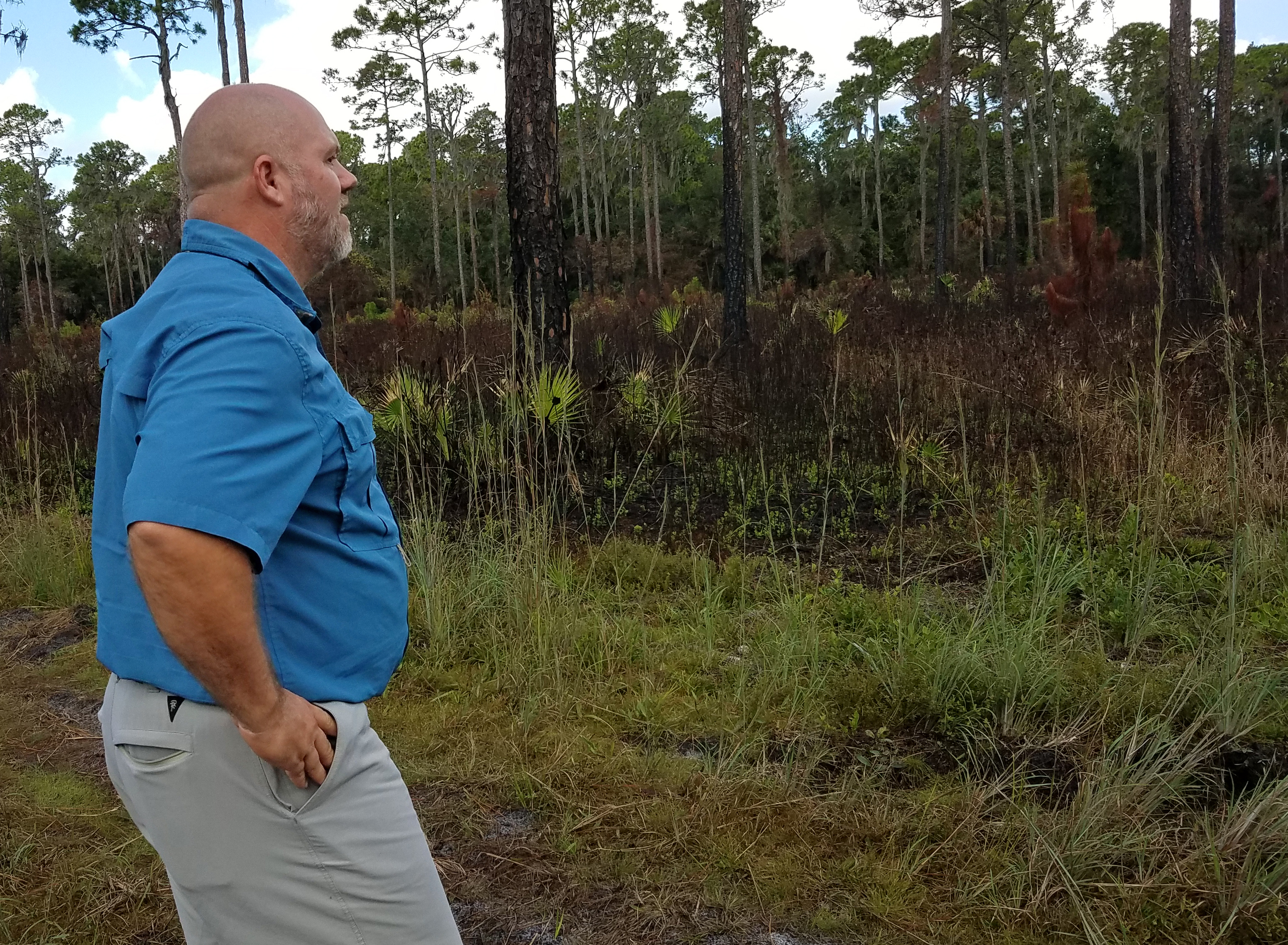 Volusia County’s Land Manager, Nick Dunnam, has been at this a long time. While recently taking a stroll through the Lake George Forest and Wildlife Management Area in Volusia’s extreme northwest, he described how years ago, the county would survey the number of bobwhite quails on the property by walking the site in the morning listening for their distinctive call and then estimating how far the sound had travelled in order to make an educated guess at their location. He decided there might be a better, more efficient approach. And that’s when he reached out to the county’s GIS staff in the Information Technology Division. GIS, or geographic information systems, is a high-tech method of capturing, storing, analyzing and managing geographical data. While GIS technology is used for all sorts of applications, its use in wildlife management is thought to be relatively new. At least that’s what the county discovered when they tried to find another GIS wildlife management program to use as a guide. (Photo of Nick Dunnam) 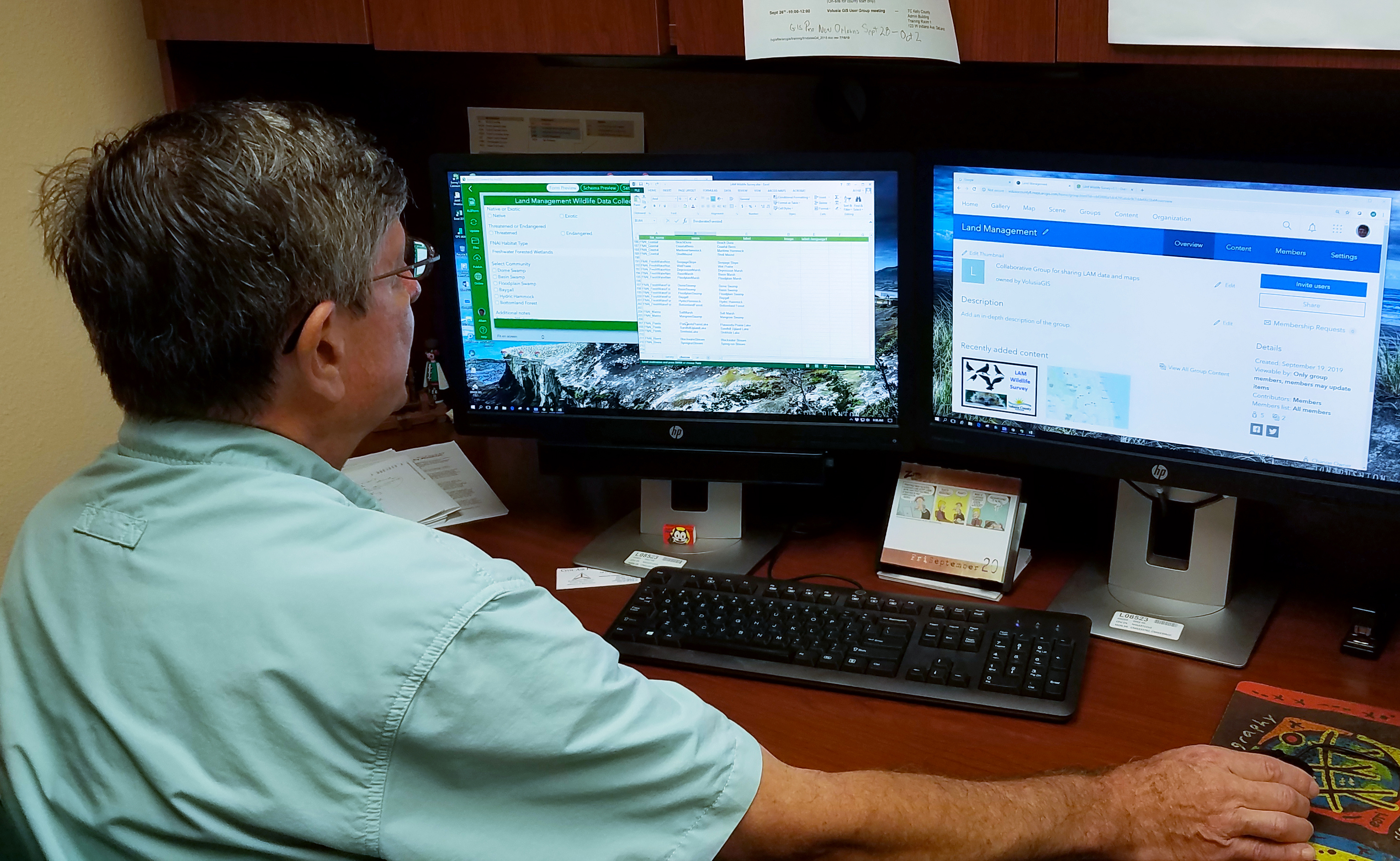 “I’m sure that it’s being done somewhere,” said the county’s GIS director, Al Hill. “But when I went and looked for some things that I could leverage without having to create them ourselves, I couldn’t find any.” (Photo of Al Hill)

So Hill and Dunnam set out to custom design a program to fit the county’s needs. What they came up with was a mobile, on-line survey instrument that integrates GPS-based, GIS spatial technology. Using a smart phone or tablet, Dunnam and his staff can access the survey to document animal sightings in the field. And with the program, their devices will automatically plot the location of the sighting on a map. Then, the survey leads participants through a series of questions designed to capture all sorts of data about field observations. So, for instance, they can enter information about the number of animals observed, whether they’re adult or juveniles, and their sex. They can also include information on the type of habitat, such as hardwood forested uplands or pine flatwoods and dry prairie, where the animals were spotted, the weather conditions – was it clear, overcast, windy, raining, hot or cold? – and the circumstances of the observation. So, for things like feral hogs, they can document whether an animal was spotted on a road, trail, or in the wildland areas.

They can even submit photos into the database for visual documentation. Recently, during two days of field testing of the app which began in mid-September, the county was able to document two coveys of bobwhite quail in the Lake George Forest and Wildlife Management Area – 10 of the birds in one location and six in another. And just like that, Dunnam’s brain child was already bearing fruit. In the future, Dunnam and his team will conduct surveys in those same two spots to see if the birds are still utilizing these locations.

Hugging the eastern shore of Lake George, the second largest lake in the state, the Lake George Forest and Wildlife Management Area is one of nine conservation properties that the county manages. The others include Deep Creek Preserve, Doris Leeper Spruce Creek Preserve, Hickory Bluff Preserve, Longleaf Pine Preserve, Lyonia Preserve, Scrub Oak Preserve, Wiregrass Prairie Preserve and the Barberville Conservation Area. But the Lake George Forest and Wildlife Management Area is a perfect microcosm of the county’s land management efforts. The site is part of a much larger, 35,380-acre wildlife management area that provides more than 20 miles of contiguous habitat along Lake George and the St. Johns River for many of Florida’s wildlife species. The portion that the county manages totals 8,062 acres. The property includes a couple of nature trails, good vantage points for spotting everything from osprey, bald eagles, barred owls, and pigmy rattlesnakes to black bears, bobcats, river otters, fox, deer and turkey.

The county’s portion of the site came into public ownership in 1990, with the purchase financed from the proceeds of a voter-approved tax for acquisition of environmentally sensitive land. Before it was acquired for preservation, the Lake George Forest and Wildlife Management Area site was part of a commercial timber operation – planting and harvesting trees for profit. The more trees, the more the profit. While commercial forestry is an important segment of the economy, the county had other plans in mind for the property.

“The county’s not in the timber production business. We’re in the habitat management business,” said Dunnam.

And when it comes to habitat management, it turns out that too many trees can be a problem – particularly for the bobwhite quail and other animals that live in the forest. That’s because instead of bushes and scrub, many animals require a softer, grassier environment to nest and forage for food sources like the insects and seeds that are on a quail’s menu. The problem is that the massive, towering closed canopy formed by high-density patches of trees blocks sunlight from reaching the ground – the sunlight needed for a grassy habitat to take hold and flourish. So the focus of the county’s long-term land management and habitat restoration plans revolve around a mix of thinning out the forest to a tree density more preferred by the animals and their habitat, replacing some of the slash pine favored by the timber industry with longleaf pine to restore areas to a more native ecosystem, as well as prescribed burns of the underbrush to help the layer of grassy vegetation renourish and prosper. Within just a few short days of a prescribed burn, the ground greenery begins to return lush and full.

The science is complex, requiring steps like analysis of soil and vegetation types to determine the most suitable locations for removing and replacing the slash pines. But the efforts are paying off, with quail and other creatures already found to be dwelling in some of the restored habitat.

“What we’re finding is that where we’re doing the thinning and burning, the birds are coming back into those areas,” said Dunnam. “What we’re doing is working. Visually, we’re seeing this happen.”

Despite all of that science, though, there’s still guesswork involved. The county knows that its habitat management practices are working, but how well? What practices are most effective? What’s the optimum tree density for each species? What areas are doing better than others, and why? What’s the right mix of thinning, cutting and burning? How far will animals travel in search of a more suitable living environment? Staff hope the data collection facilitated by the GIS app will help provide insights and answers. By tracking and analyzing the geographic data from animal sightings, a picture should emerge depicting the movement of species on county lands and showing if those animals are expanding their range. Connecting that data to the various land management practices will help the county assess what’s working and where to focus its efforts.

“This app is going to be an extremely valuable management tool for us,” said Baylie. “Now we’re going to have an objective source of data to track over time. It’s definitely going to help with the decision-making and where we put our resources.”

Meanwhile, back at the Lake George Management Area, Dunnam was busy pointing out where and how the county has intervened in the forest to restore animal habitat. First, he pointed out a patch of vegetation, saying: “We have a good burn interval on this site. This particular area has been burned three times in the last 10 years.”

Then Dunnam pointed out another area that had undergone a prescribed burn about a year ago.

“This is good quail habitat,” he explained. After briefly stopping at the sight of a bald eagle majestically soaring overhead, Dunnam pointed to another area of thicket that needs more work.

For all of his work, Dunnam realizes that the results of that forestry science and all of that planting, thinning and burning won’t be fully realized for 20 years or more. But knowing that he’s helping to preserve – and improve – the natural environment for future generations is a great source of personal and professional satisfaction for Dunnam.

“To me, it’s important that we have this available for the public,” he said. “This could very easily be subdivisions all throughout here, and that’s something very important that today’s youth need to understand. There isn’t any land left. What’s there is there. Once you build on it, it’s gone forever.”

For now, the new GIS wildlife management app is just for the county’s internal use. But sometime in the next six to 12 months, the plan is to roll out a version for the public to use to record their sightings. As Baylie sees it, all of those critters will benefit from more sets of eyes watching out for their well-being and survival.

“More eyes on the ground gives you better data on what’s going on,” said Baylie. “It helps us track all of those animals that we’re trying to make a better habitat for.”