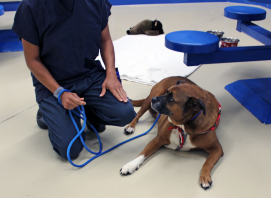 The Volusia County Division of Corrections launched a brand new dog obedience program this month that aims to change the lives of both furry, faithful, four-legged students and their inmate handlers.

A cooperative initiative with Halifax Humane Society, the program trains female inmates at the Volusia County Correctional Facility in Daytona Beach to instill specially selected dogs with the obedience traits needed to become adoptable, household pets. But that’s not all: For inmates who excel as handlers, Halifax Humane Society has said that they would consider them for employment after they’re released. In essence, the newly launched dog program is a second chance for both people and pooches. For the dogs, the goal is to save them from a potentially gloomy fate at the pound. And for the inmate handlers, they learn a practical skill that can give their life behind bars meaning and purpose and a step towards redemption.

With help from Halifax Humane Society, the program was launched two weeks ago by Volusia County Corrections Director Mark Flowers. Flowers has been a strong advocate for providing more positive outlets for inmates and less idle time for them to get into trouble. The goal is to make the jail experience not just punitive, but rehabilitative as well. The dog obedience class is but the most recent example.

“Anything we can do to keep them busy, keep them positive and give them a sense of hope is a blessing from us,” said Flowers.

The program was launched last week with its first two dogs, a 6-month-old puppy named Diva and an 8-year-old pooch named Gracie. Each dog has two female inmate handlers who will train the animals for seven weeks, Monday through Friday for eight hours a day. At night, the dogs sleep in crates in the cellblocks, meaning they’re under 24-hour care from their handlers. With guidance from Corrections staff and the Humane Society, the inmate handlers are learning to train the dogs assigned to them using techniques such as enticing them into mastering a skill with treats and rewards, voice commands and gentle encouragement. In seven weeks, they’ll cover things like training the dogs to stay, come, sit, walk through a crowd, accept friendly strangers, walk without tugging at the leash and how to appropriately react to distractions and other dogs. The handlers also will learn animal grooming and first aid. At the end of the seven weeks, there will be a graduation ceremony for the animals and their handlers and then the dogs will be returned to Halifax Humane Society and placed for adoption.

“The dogs, their future was bleak at best,” said Warden Larry Langdon, who’s overseeing the program. “And the inmates’ future may seem bleak at times. They’re traveling this road together, and this new program provides a window of opportunity to build a better future for both.”