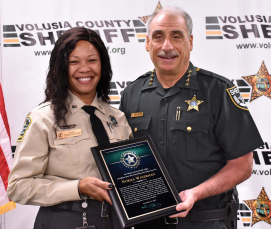 As is often the case, a pair of burglars was recently stopped in their tracks thanks to an alert civilian crime-fighter who not only spotted the suspicious activity, but then went above and beyond by calling it in and keeping a watchful eye on the suspects until deputies arrived to take them into custody. That observant guardian was no ordinary citizen: It was Animal Services Officer Norma Waterman, who was honored by Sheriff Mike Chitwood for helping his deputies nab the two teen culprits.

The incident began around noon Oct. 4. While driving to work from her home in Deltona, Waterman spotted the teens hanging around a house on Humphrey Boulevard and acting suspicious. Upon closer look, one of them appeared to be tampering with the screen door in the back of the house. Although with the county for little more than a year, Waterman knew exactly what to do. Of course, having previously served as a sworn police officer in both South Miami and Orange County might have had something to do with it. Waterman parked close by to keep the teens under surveillance while alerting law enforcement. From her vantage point, she was able to look through the front window of the house to see one of the suspects inside. Then she not only kept law enforcement updated, but she followed along in her vehicle as the teens walked away from the crime scene so responding deputies would know exactly where to find them. The two were quickly apprehended while in possession of incriminating evidence – a $76 bottle of CDB gummies that had been swiped off of the victim’s kitchen table.

Both juveniles, ages 16 and 17, were charged with residential burglary, while the one accused of stealing the gummies that are used to treat ailments such as arthritis, anxiety and depression was additionally charged with petty theft. While it may have been all in a day’s work for deputies, Waterman’s alert actions earned her Sheriff Chitwood’s praise – and the agency’s Outstanding Citizenship Award. A thankful Chitwood presented a plaque to Waterman during an awards ceremony this morning at the Deputy Stephen Saboda Training Center in Daytona Beach.

“Your observance, prompt response and willingness to come to the aid of law enforcement display outstanding citizenship that is worthy of recognition,” read the citation from the sheriff. For her part, Waterman considered the award an unexpected surprise. “I was very happy about the outcome of the incident,” said Waterman. “I’m just glad I was able to help my community. I live there too.”

In addition to the Sheriff’s award, Waterman’s actions also elicited compliments from her proud and appreciative boss, Animal Services Director Adam Leath. “Officer Waterman is an invaluable part of our animal services team,” said Leath. “She embodies the qualities of a true community advocate and continuously looks out for the needs of both the two- and four-legged members of our community.”