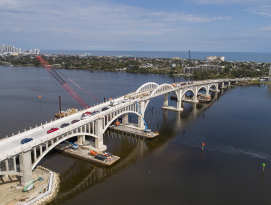 It won’t be long now.

Construction of the new Veterans Memorial Bridge over the Halifax River recently reached a significant milestone with completion of the driving surface. With the bridge deck now finished, work will proceed on finishing touches to get the span ready for its anticipated opening to the driving public in March. And that’s good news for residents and visitors, beachgoers, merchants, traffic flow and just about anyone who’s had anything to do with this massive project.

“The amount of work it has taken to get us to this point has been incredible,” said Tadd Kasbeer, Volusia County’s director of engineering and construction. “Building a bridge is a monumental undertaking, and it feels really good to be in the homestretch. This is going to be a genuine landmark for Volusia County.”

Officially dubbed the Tom Staed Veterans Memorial Bridge, the new span replaces the old Orange Avenue bridge that was built in 1954. When completed, the new bridge connecting Daytona Beach’s mainland to the beachside will be the only concrete arch bridge in Florida. In addition to the visually striking series of grand arches, the bridge will also feature sidewalks, a fishing pier on both sides of the river and plaques at 28 scenic overlooks commemorating conflicts in America’s military history. The $46.2 million cost to design and build the 1,885-foot-long bridge is being paid for by the federal government.