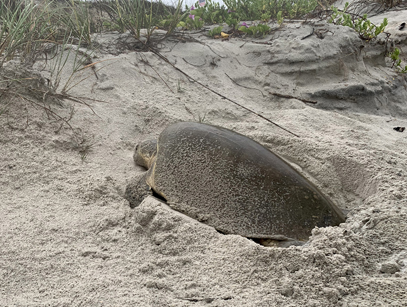 Sea turtle watchers rejoiced last week when a rare Kemp’s ridley sea turtle was spotted nesting in New Smyrna Beach. This is the same turtle that was initially tagged in Daytona Beach Shores in 2016 by staff from the Marine Science Center.
The Kemp’s ridley, the smallest and most imperiled of all sea turtle species, is unique among species found in Florida in that it nests almost exclusively during daylight hours. Its primary breeding grounds are in Mexico, and very few nests have been recorded in Florida.
Fourteen Kemp’s ridley nests have been documented in Volusia County since 1996. Of those, 10 nests were laid by three turtles that were tagged for future re-identification. Two nests recorded in 2019 were made by a tagged female that has nested in Volusia seven times since 2005. One other turtle, which was tagged while nesting in Wilbur-by-the-Sea in 2017, has been observed only one time.
So far this season, 213 nests have been documented in Volusia County, including this Kemp’s ridley, three leatherback, 208 loggerhead and one green sea turtle nest.
Sea turtle nesting season runs from May 1 through Oct. 31. For more information about Volusia County’s sea turtle program and to learn how you can help safeguard these protected species, call 386-238-4668 or visit www.volusiaseaturtles.org.
Photo credit: Jaymie Reneker, Ecological Associates