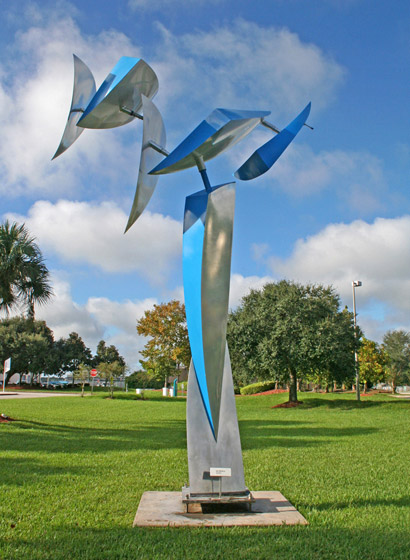 Lin Emery
New Orleans, La.
Click on the image above to see a larger view.

New Orleans artist Lin Emery seeks to capture the energy inherent in nature in her kinetic sculpture. Not only does her iconography rely on natural shapes, but it is the forces of nature such as wind or water that set her sculptures in motion. Movement, or kinetic activity, whose aim is to express harmonic patterns visually, is the central element for Emery. The highly polished surfaces of her welded aluminum sculptures invite a dialogue between the industrial character of their construction and the organic connotations the works evoke.

Although her sculptural forms are abstracted from nature, her work has always had a relationship with modern science, mathematics and chaos theory, which deals with the elements of predictability and unpredictability.

Emery had an acclaimed retrospective exhibition at the New Orleans Museum of Art in 1996. The following year, her 10-meter kinetic sculpture commissioned for the Osaka Dome, Japan, was awarded the Osaka Grand Prize for Public Sculpture. Her work is in many major public and corporate collections in the United States, the Far East and Europe.

“My sculpture is kinetic, meaning that it moves. The elements are derived from nature, and I borrow natural elements — wind, water, magnets — to set them in motion. The rhythms are influenced by infinite variables: the points of balance, the normal frequency of each form, the interruption of the counterpoise. I juggle, juxtapose, and adjust to achieve the dance or pantomime that I want. Then the sculpture takes over and invents a fillip of its own.” – Lin Emery