Scrub Jays in the Preserve

Volusia County's Land Management staff will begin a weeklong fire line maintenance project in Lyonia Preserve between Aug. 1 and 6. They will mow the inside perimeter using a small tracked skidsteer with a cutting head on the front. The main task is to cut/mow some of the overgrown vegetation on the inner perimeter fence line on the east and west sides of Providence Boulevard. This work is being done so a fire break of at least 10 to 12 feet can be established. Gopher tortoise burrows will be identified and flagged, with a 5 to 10 foot perimeter remaining as a buffer. Trails will remain open throughout the project. 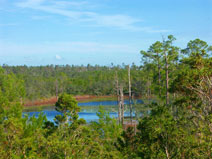 is a 360-acre joint project of Volusia County's Land Acquisition and Management Division and the Volusia County School Board to restore and maintain scrub habitat. Since 1994, restoration efforts have removed overgrown sand pines and opened up the understory, creating the characteristic bare sand areas with low-growing vegetation preferred by scrub species.

Lyonia Preserve is a great place to see one of Volusia County's protected species, the Florida scrub jay, in its natural habitat.

Male and female scrub jays cannot be distinguished by their plumage.

Volunteers from The Nature Conservancy (TNC) Jay Watch Program have been counting scrub jays in Lyonia Preserve, on a monthly basis, since 2006. The latest TNC figures for Lyonia Preserve are 118 birds in 27 family groups.

An insect gall is formed when adult insects inject their larvae into the leaf of a plant. The gall or capsule is formed by a reaction (defense mechanism) between the adult insect’s fluids and the plant tissue. While the plant is trying to defend itself from the insects, it is providing shelter for the insects from predators and harsh conditions. Many of the galls you will see are from gall wasps.