For stranded sea turtles during
nights and weekends call Sheriff's
dispatch and option 1 for operator:
386-248-1777

All of the world’s sea turtles are designated as either endangered or threatened and are protected by local, state, federal and international laws. This listing means that the sea turtle populations are not growing and may be nearing extinction.

Sea turtles spend most of their life in the ocean. Female sea turtles will emerge from the water and crawl up onto sandy beaches to lay eggs in May through October each year.

Sea turtles emerge from the surf at night and crawl up the beach toward the dunes to dig a deep hole in the dry sand to lay their eggs. The eggs are then covered with sand and the adult turtle returns to the sea. An average nest contains 100 eggs! One female will lay three to five nests each nesting season. 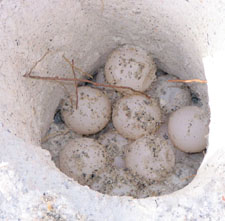 About two months later, hatchlings (baby turtles), emerge from the nests and crawl to the ocean on their own. This amazing life cycle has occurred for thousands of years. By protecting sea turtles during this important part of their life, people will continue to observe these magnificent creatures visiting the beaches each summer and throughout their ocean habitats.

Unfortunately, many factors threaten sea turtles both during their nesting cycle and while in the water. Beach equipment left out at night and even curious people getting too close can also deter a turtle from nesting at any given location. On developed beaches everywhere, females attempting to lay their eggs encounter human made obstacles such as brightly lit beaches and hard structures such as seawalls and walkovers. Sea turtles have been killed as a result of being mislead by bright artificial lights which can disorient them while out of the water.  In many cases,  they find their way onto streets, private property and even into swimming pools! In the water, commercial fishing fleets often inadvertently catch sea turtles which often results in either killing or injuring them.

Water pollution and marine debris also threatens their habitat. All too frequently, sea turtles and other marine life mistake floating plastic garbage for food or they can get tangled in floating trash. Once ingested, they feel full and may decline eating and starve to death.  If they continue to eat plastics, their digestive organs become impacted with trash which they cannot digest.  You can help reduce impacts to marine wildlife by eating seafood sold by companies which use sea turtle protection gear and follow environmentally responsible fishing practices and by disposing of your trash properly.