In 1821, Major Charles Wilhelm Bulow acquired 4,675 acres of wilderness bordering a tidal creek that would later bear his name. John James Audubon, the famous naturalist, was a guest at the plantation during the winter holidays in 1831. In January 1836, a band of raiding Seminole Indians, resisting removal to the West, looted and burned the plantation. Today only the coquina walls and chimneys of the sugar mill remain standing. Bulow Plantation Ruins Historic State Park is three miles west of Flagler Beach on State Road 100, then south on County Road 2001 in Bunnell.
For more information, call 386-517-2084.
See also Volusia Anthropological Society story in this website. 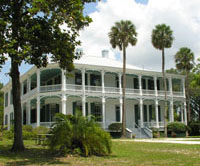 Built in 1871 by Frederick deBary, a prominent champagne importer from New York City, this hunting lodge is listed on the National Register of Historic Places. It's open for tours and special events at 198 E. Sunrise Blvd., DeBary.
For more information, call 386-668-3840.

Located in a WWII era military residence, this National Museum of Naval Aviation qualified facility seeks to commemorate the activities and history of NAS DeLand between 1942 and 1946, at 910 Biscayne Blvd., DeLand.  For more information, call 386-738-4149.

The stadium was built in 1914 and is one of the five oldest stadiums still being used. On March 17, 1946, it became the first place in Florida to allow Jackie Robinson to play in an integrated baseball game during Spring Training after both Sanford and Jacksonville cancelled games. Robinson would go on to break the color barrier in Major League baseball the next year, making history, while the Brooklyn Dodgers made Daytona their new spring home. The stadium, which is currently the home of the minor league team the Daytona Tortugas, was named after Jackie in 1989.

The former home of the founder of Bethune-Cookman University is a memorial to Mrs. Bethune and the Foundation that is dedicated to research, interracial activity and sponsorship of wider educational opportunities. Built in 1914 and located on the college campus, it opened to the public in 1953. In 1975, the National Park Service gave the Foundation its National Historic Landmark designation. Artifacts, citations, plaques and pictures of dignitaries are on display. It also is the gravesite of Mrs. Bethune. The museum is open from 9 a.m. to 4 p.m. Monday through Friday at 640 Second Ave., Daytona Beach.
For more information, call 386-255-1401, ext. 372 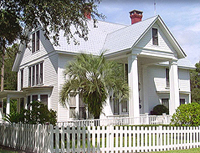 This home was built in 1886 by DeLand attorney George Hamlin. It was originally a one-and-a-half story structure, built on land purchased from Henry A. DeLand. This site provides information and museum photos at 137 W. Michigan Ave., DeLand.
For more information, call 386-740-6813.

Learn about the history of plantations and the role of slavery from the First Spanish Period to the U.S. Territorial Period.

Those who are deeply interested in interpreting the rich prehistory of Volusia County may find this a compelling story of our first residents.
See also: People of the Shellmounds by Lani Friend.