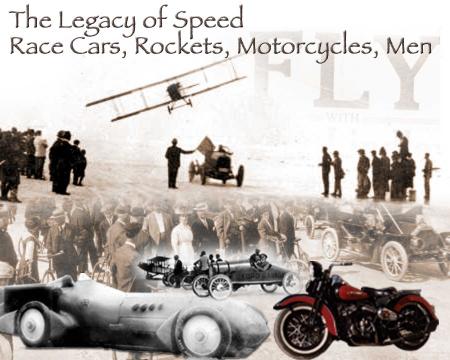 Ormond Beach - The Birthplace of Speed

The automobile had just been invented and men were searching for places where they could drive on hard surfaces. The existing "roads" were horse trails and posed problems for the cars. In 1902, a retired businessman named J.F. Hathaway distributed photographs of the beach and sent them to leading automobile journals and newspapers along with a story extolling the hard packed sand of Ormond Beach as the ideal race course. This information was picked up by William J. Morgan who was a correspondent for Automobile Magazine. Morgan arrived in Ormond in February, 1903 and met John Anderson and Joseph Price, managers of the Ormond Hotel. The three men decided that a winter automobile racing event was the perfect promotional tool for the Hotel. Morgan secured the help of a hastily formed Daytona and Seabreeze Automobile Association and the plans were underway.

Without much lead time the turnout for that first race series was small. On March 26, 1903 the first timed trials were held. Entrants were Alexander Winton in his Bullet no. 1 and H. T. Thomas driving the Ransom E. Olds' Pirate. That day the men drove in separate classes, but two days later they met in the Ormond Challenge Cup. After an exciting race, which the Bullet won by one-fifth of a second, all agreed that the sands of Daytona and Ormond were the perfect place for racing. Ormond Beach had earned its title as the "Birthplace of Speed."

The newly formed Florida East Coast Automobile Association built a clubhouse at the Silver Beach approach, and this became the starting point for the runs headed northward. Succeeding years saw an influx of millionaires such as William K. Vanderbilt Jr. and Henry Ford. The course was expanded to include a run all the way to Ponce Inlet and back to Ormond Beach. The Ormond Garage, known as "Gasoline Alley," was built in the summer of 1904 to accommodate the racers and their mechanics. A plaque commemorates this site at 113 E. Granada Blvd. The garage burned to the ground on January 7, 1976.

A garage at 48 W. Granada Blvd. currently bears the name “Ormond Garage.” This was built in 1919 by Robert E. Lowe. The management of the original Ormond Garage did not want repairs done there, so Lowe, a mechanic, moved west of the bridge and built the brick building which still exists. In its heyday, it also bore the name Ormond Garage. Presently it contains a large collection of period artifacts and pictures of the famous cars and people who frequented the garage.