The Role of Slavery

Africans and their descendents were considered able and hardy workers in the ongoing struggle to subdue the subtropical wilderness and establish the plantation system. The British Governor, James Grant, believed that African slaves were best suited for work in East Florida. Slaves also were crucial to the construction of these massive East Florida sugar mills. Their knowledge of rice, cotton and sugar agriculture was extremely valuable to the planters. With the exception of the Turnbull colony, the plantations of Northeast Florida were dependent upon the labor of slaves. 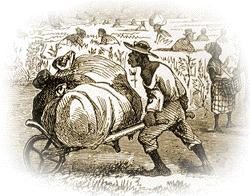 Slaves sometimes became free people of color through personal and marital alliances with their owners. Some established small plantations of their own and became slaveholders themselves. Some slaves seized the freedom of the Florida wilderness as they escaped slavery by flight and came to be called the Black Seminoles, friends and allies of the Indians. Slaves led a more benign, if un-free, existence under the Spanish, whose policies towards them were more lenient and conducive to attaining freedom and legal status as citizens. Spanish law in Florida provided legal protections, even for slaves. A slave could even take his owner to court for overly abusive treatment.

During the British period, slavery became increasingly common. Throughout the 18th century, the British pursued a policy of vastly increasing their profitable trade in slaves, and even supplied the Spanish colonies with captives from Africa. The British also introduced the task system, in which individual slaves were assigned a specific task to accomplish within a given period. If completed ahead of schedule, the slave could use the remaining time for his own needs. During the U.S. territorial times, the races were not allowed to mingle freely as they did under the Spanish and the British. Children of mixed blood were no longer legally recognized. Many mulatto freedmen and women, called free people of color, feared being placed into bondage by unscrupulous profiteers who often seized them as runaway slaves. Some white planters moved their mixed-blood families to the Caribbean islands to escape these threats. The labor demands of plantations expanded the trafficking in slaves needed to plant fields, cut cane and process it into sugar. The increasing demands of the world economy led to a thriving trade in slaves, rum and sugar which dominated trade between Africa, England and the Americas.