When the Spanish reclaimed Florida in 1783, their world power had weakened considerably. Spain was faced with the dilemma of too few colonists, forcing it to give up its policy of requiring settlers to convert to Catholicism. This encouraged many English planters to return to Florida in the early 1800s. Generous grants were awarded to well-placed Caucasians willing to develop Northeast Florida lands into productive plantations.

Spain continued to encourage Creek Indians to migrate into Florida. Creek Indians were more than willing to escape harsh United States policies. Runaway slaves also sought freedom in the Spanish colony. Many U.S. citizens considered Florida a sanctuary for enemies of the United States. Land-hungry settlers also considered Florida an easy target for territorial expansion. These factors eventually led to the notorious 1818 invasion of Spanish Florida by Andrew Jackson, during which he executed two British citizens for treason. 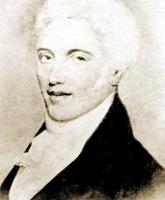 Robert McHardy's Scottish mercantile firm sent him on long voyages to the West Indies and Charleston which led him and his brother to establish their own company in Nassau. McHardy met and married the young Mary Dean Bunch, the daughter of John Bunch, a major Florida plantation owner. Mary also owned a plantation in her own name. McHardy developed their plantation for the cultivation of cotton and sugar cane. His wife also held another 1,100 acres of land in McDougal and Bisset Swamps, south of New Smyrna Beach.

Of McHardy's children by Mary Dean Bunch, only John Bunch Bonnemaison McHardy survived. Mary Dean died in 1807. She may have been buried on the plantation. McHardy then married Caroline Williams, the natural daughter of Samuel Williams of Orange Grove Plantation. Their union produced three daughters. After Caroline's death in childbirth in South Carolina, McHardy was never to see his daughters again, because he died soon after Caroline's death and was buried in St. Augustine.

His son, John, was never able to regain his family's entire land legacy, although he came to Florida to claim it after his father's death. While in Florida, John lived among the Seminoles for some time, gaining their respect. After his experiences here among the other planters, he claimed there were not many honest men in Florida. He returned to a distinguished naval career, becoming an admiral in the British Royal Navy in 1870.