Introduction Along the coast, storm surge is often the greatest threat to life and property from a hurricane. In the past, large death tolls have resulted from the rise of the ocean associated with many of the major hurricanes that have made landfall. Hurricane Katrina (2005) is a prime example of the damage and devastation that can be caused by surge. At least 1500 persons lost their lives during Katrina and many of those deaths occurred directly, or indirectly, as a result of storm surge.

Storm Surge vs. Storm Tide
Storm surge is an abnormal rise of water generated by a storm, over and above the predicted astronomical tides. Storm surge should not be confused with storm tide, which is defined as the water level rise due to the combination of storm surge and the astronomical tide. This rise in water level can cause extreme flooding in coastal areas particularly when storm surge coincides with normal high tide, resulting in storm tides reaching up to 20 feet or more in some cases. 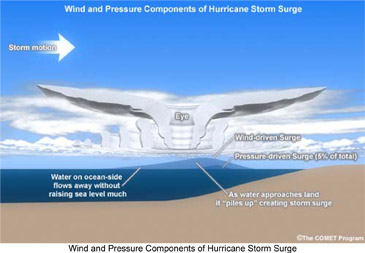 The maximum potential storm surge for a particular location depends on a number of different factors. Storm surge is a very complex phenomenon because it is sensitive to the slightest changes in storm intensity, forward speed, size (radius of maximum winds-RMW), angle of approach to the coast, central pressure (minimal contribution in comparison to the wind), and the shape and characteristics of coastal features such as bays and estuaries.

Adding to the destructive power of surge, battering waves may increase damage to buildings directly along the coast. Water weighs approximately 1,700 pounds per cubic yard; extended pounding by frequent waves can demolish any structure not specifically designed to withstand such forces. The two elements work together to increase the impact on land because the surge makes it possible for waves to extend inland. 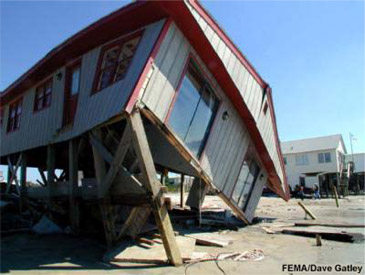 Although elevated, this house in North Carolina could not withstand the 15 ft. (4.5 m) of storm surge that came with Hurricane Floyd (1999)

Additionally, currents created by tides combine with the waves to severely erode beaches and coastal highways. Buildings that survive hurricane winds can be damaged if their foundations are undermined and weakened by erosion. 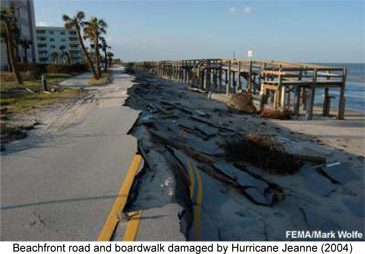 In confined harbors, the combination of storm tides, waves, and currents can also severely damage marinas and boats. In estuaries and bayous, salt water intrusion endangers the public health, kills vegetation, and can send animals, such as snakes and alligators, fleeing from flooded areas. 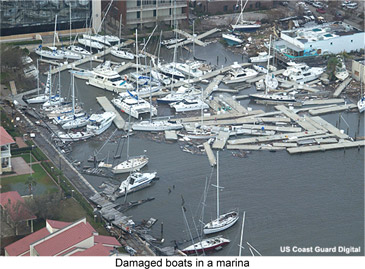 Ike 2008 (SLOSH Historical Run)
Hurricane Ike made landfall near the north end of Galveston Island as a Category 2 hurricane. Storm surges of 15-20 feet above normal tide levels occurred along the Bolivar Peninsula of Texas and in much of the Galveston Bay area. Property damage from Ike is estimated at $24.9 billion. More...

Katrina 2005 (SLOSH Historical Run)
Katrina was one of the most devastating hurricanes in the history of the United States. It produced catastrophic damage - estimated at $75 billion in the New Orleans area and along the Mississippi coast - and is the costliest U. S. hurricane on record. Storm surge flooding of 25 to 28 feet above normal tide levels was associated with Katrina. More...

Dennis 2005 (SLOSH Historical Run)
Dennis affected much of Florida, and its effects extended well inland over portions of the southeastern United States with the maximum amount rainfall of 12.80 inches occurring near Camden, Alabama. Storm surge flooding of 7-9 ft produced considerable storm surge-related damage near St. Marks, Florida, well to the east of the landfall location. The damage associated with Dennis in the United States is estimated at $2.23 billion. More...

Isabel 2003 (SLOSH Historical Run)
Isabel was the worst hurricane to affect the Chesapeake Bay region since 1933. Storm surge values of more than 8 feet flooded rivers that flowed into the bay across Virginia, Maryland, Delaware, and Washington, D.C. Isabel was the most intense hurricane of the 2003 season and directly resulted in 17 deaths and more than $3 billion in damages. More...

Opal 1995 (SLOSH Historical Run)
Hurricane Opal made landfall near Pensacola Beach, Florida as a Category 3 hurricane. The storm caused extensive storm surge damage from Pensacola Beach to Mexico Beach (a span of 120 miles) with a maximum storm tide of 24 feet, recorded near Fort Walton Beach. Damage estimates for Opal were near $3 billion. More...

Camille 1969 (SLOSH Historical Run)
Camille was a Category 5 hurricane, the most powerful on the Saffir-Simpson Hurricane Wind Scale with maximum winds of more than 155 mph and storm surge flooding of 24 feet that devastated the Mississippi coast. The final death count for the U.S. is listed at 256. This includes 143 on the Gulf coast and another 113 from the Virginia floods. More...

Audrey 1957 (SLOSH Historical Run)
There were 390 deaths associated with Audrey as the result of a storm surge in excess of 12 feet, which inundated the flat coast of southwestern Louisiana as far as 25 miles inland in some places. More...

Galveston 1900 (SLOSH Historical Run)
At least 8,000 people died when hurricane storm tides (the surge plus the astronomical tide) of 8-15 feet inundated most of the island city of Galveston, TX and adjacent areas on the mainland. More...

What is storm surge inundation?
This is simply referencing storm surge as height above ground level. For the SLOSH model, this is done by subtracting the average elevation of each SLOSH grid cell from the water level computed by the SLOSH model which is referenced to a vertical datum. This helps to alleviate the confusion inherent with vertical datums. Now, when we say twenty feet of water, we mean twenty feet above ground level.

How is storm surge observed and measured? 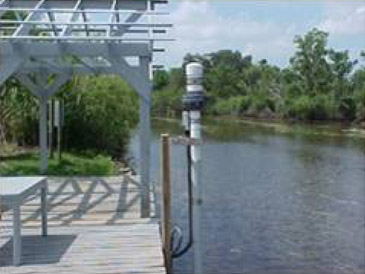 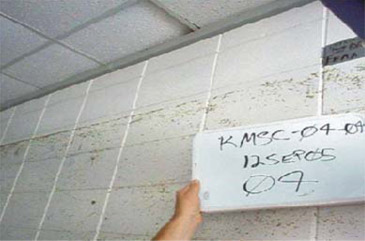 High Water Marks Inside A Building 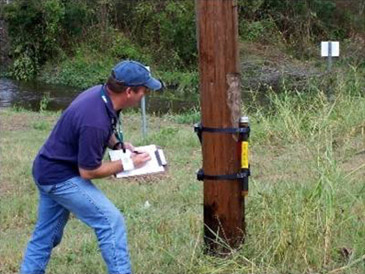 Where can one find storm surge data and storm related products during a tropical event?

Unlike earlier versions of the Saffir-Simpson Hurricane Scale which only provide average storm surge values by category, the storm surge interactive risk maps show potential storm surge vulnerability for all areas and incorporate varying landfall locations, local bathymetry and topography, varying storm sizes, forward speeds, tracks, approach angles, and tide levels. This is accomplished by performing thousands of different SLOSH simulations for a given area and then compositing the results into a worst case snapshot, by Saffir-Simpson Category, indicating storm surge vulnerability. Thus, for a given area of interest, the storm surge interactive risk maps make use of thousands of hurricane landfall scenarios.

The storm surge interactive risk maps are different from my local hurricane evacuation zones. Which is correct?

According to the storm surge interactive risk maps, I live along the edge of an area susceptible to inundation. Does this mean my home is safe from the potential impacts from storm surge? 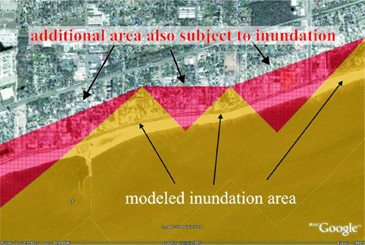