Enterprise on the St. Johns River

The premier destination on the St. Johns River

Once the head of navigation on the St. Johns River, Enterprise became known far and wide as a mecca for hunting, fishing, and tourism. Beginning even before the Civil War, adventurers such as James Stirling, author of Letters from the Slave States, embarked on steamers

and made the exciting excursion upriver from Jacksonville to “the premier destination” on the river – Enterprise. When they got there, they weren’t always excited about the accommodations or the amenities of the town, however. The growing popularity of the place led to overcrowding of the main hotel, the Brock House, so that visitors were lucky to find an empty pool table or a dry dinghy for a night’s rest. As to the town, Stirling called Enterprise "the furthermost outpost of Southern civilization" - at that time nothing more than a few workshops, mud roads, and a wharf. Its main advantage was its position as the end of the journey upriver.  But it would soon become much more.

Enterprise began as the dream of Cornelius Taylor, frontiersman and Indian fighter, who raised a band of 50 to 60 colonists from Mayport and started the first settlement at the conclusion of the Second Seminole War a mile to the east of the community’s present location. As Territorial Representative for Mosquito County, Taylor had Enterprise made the county seat. Shortly after, Florida became a state, and this area of Mosquito County was reformed as Orange County. After six months, Mellonville was named county seat. Taylor and other residents moved to Texas to follow the seat of the war. 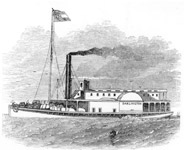 steamboat magnate, began regular service to Enterprise and built a steamboat hotel a mile to the west, Enterprise was reborn in its present location as a thriving river town. Shortly afterward, it was designated the county seat for Volusia County. Pictured is his most popular vessel, the “Darlington.”

Today, Enterprise is known as a model for other communities seeking to preserve their history and rural charm in the face of increasing annexations and encroaching development from nearby municipalities. In 2004 Enterprise made history again as the Enterprise Preservation Society partnered with Volusia County to design the Enterprise Local Area Plan, a blueprint for managing development within its boundaries.

Other sources:
Hopes, Dreams, and Promises by Richard Schene
Volusia: The West Side by Arthur E. Francke, Jr.